🌅 You Did What? by Isabella Harron 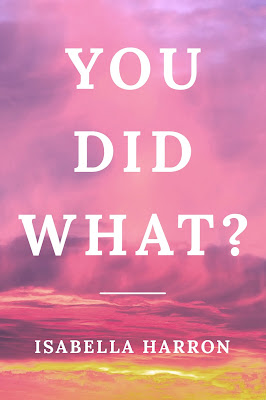 Natalee, a widowed mother of a beautiful college aged daughter had given up the idea of forever kind of love. Having resigned herself to her career, home and friends. That is until Joe Costas a new younger detective moved to town. Suddenly Natalee is hot and bothered with unearthed feelings and desires. Only one problem, her daughter Jenny staked a claim to the same man. What’s a mother to do?

“Come on Jenny, I am driving you home.” Joe was surprised by her sudden willingness to leave. Jenny followed him to the parking lot. As Joe opened the truck door for her, she leaned into him, giving him a full look at her cleavage down her shirt. Ignoring the temptation, instead securing the seat belt. Feeling fortunate, she told him Natalee's full address before she dozed off.
Pulling up in the drive, he placed the truck in park. He nudged Jenny,
“We are here.” She did not move. Getting out, closing the door softly mindful of the neighbors and the late hour. Walking around to the passenger side of the truck, he could not help but admire the manicured lawn with landscaping lights dotting the different greenery. Opening the door, he pulled her from the truck, standing briefly before slumping down. Joe quickly lifted her, up, placing her over his shoulder. Grabbing her purse, fishing for the keys while he walked to the front door. Struggling to hold her, the purse and find the correct key for the door was proving to be quite a challenge. Hoping there was not an alarm, as he inserted the key the door opened.
Standing in front of him was Natalee. Joe could not help but notice her tank top and pajama bottoms. Her face scrubbed clean, he caught the scent of coconuts, sending a vision of them on the beach, flashing before his eyes. He managed to say.
“Sorry, did not mean to wake you. She fell asleep while I drove. I got the address out of her and that was it. Wasn't able to wake her when we got here.” Nodding, Natalee led the way down the hall to the first bedroom on the right and opened the door. He laid Jenny on the bed. Natalee removed her heels, covering her with a light blanket. Jenny began to snore before they stepped from the room. Joe followed Natalee towards the front door. Hesitating, reaching for her, his fingers lightly touching her arm, desire coursing through his body.
The intimacy of the late hour and low light only added to the sounds of each breath she took, heightening his desire. Joe spoke, his words soft caressing her in the low light.
“Natalee, I really enjoyed talking to you tonight. I heard what you said. And I understand more now, than I did a few hours ago.” Natalee crossed her arms. His eyes wandered towards the soft swell of her breasts above her tank top. The words lost while his fingers ached with desire to trace a fingertip across the top of her soft mounds. His heart began to pound, sweat formed on his hands, he attempted to stall. He wanted to touch her, hold her until dawn. He was not ready to go home. He just knew, he did not want this day to end.
There were so many things he wanted to ask but he didn't. Instead he said.
“I would really like to see you again.” She surprised him when instead of responding, she opened the door, thanking him for bringing her daughter home safely, and then a simple goodnight. His head low, as he returned to his truck saddened by the thought, of how this night had taken such a wrong turn.

Isabella started creating stories in her childhood. Inspired by time spent with her great grandmother. People passing by became the main character in their very own world. To this day, someone walks by and a glance ensues catching the eyes of stranger. A romance has begun. This is all it takes to set her mind turning in a romantic blur of possibilities.


Taking time to marry and start a family, the stories were never far from her heart. The words have never stopped. When she isn’t writing Isabella enjoys a shaded spot on a warm day with a book and a tall glass of ice tea. A southern girl at heart devoted to her family, four legged ones included. Other passions enjoyed are photography, her horses and travel. Looking forward to each year with the possibility of a new place to discover. But with all the excitement of an undiscovered experience, one land holds a special spot in her heart. Ireland, after spending two weeks there several years before it continues to pull at her heart strings luring her to her ancestral home.