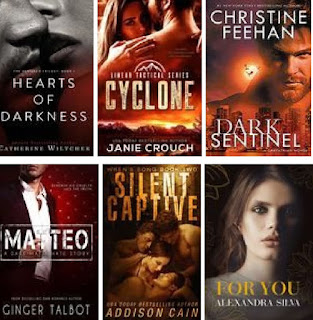 Hearts Of Darkness by Catherine Wiltcher

Engaging - Sexy - Suspenseful
Dante - Dante wasn't always a slave to his darkness - there was a time when he was full of light and love - but that time is long forgotten. Now he has no conscience - He wants He takes - And by the fires of Hades let no man make the mistake of coveting that which is his.
I really liked Dante - His character was charismatic despite the darkness that surrounds him.
Eve - I had mixed feelings about her - In the beginning, she felt a bit wishy-washy, I guess I would have liked for her to hold out a bit longer? That is just me though. As the story progressed her character grew in strength and was definitely a woman to be reckoned with. Loved her witty banter.
The back and forth between these two was explosive - One of the best couples of the year. As I said previously it did take some time to develop but once the two of them clicked 🔥
The secondary and supporting characters are well developed - I was hoping for a little more on a couple of them in the future but alas for some that is not to be 😢. The story-line flows smoothly lots of "OMG' holding your breath moments and "Please NO!" I did not see that coming twists!
I read a comp copy
This does end on a bit of a cliffy.  AMAZON

Truly an amusement park of emotions - I laughed, I cried, I broke, I hoped

Annie has always tried to stay under the radar - and for most of her life, she has succeeded. When fate decides to up-end her life she finds herself back in the one place she was told never to return too - having to face the one man who could destroy her chance of starting over.
Zac has loved, he has lost. After finishing his term in the military he returned home along with his fellow brothers in arms. As a team, they started Linear Tactical. Life is good - until an accident of circumstance lands him in the care of Annie - the one woman who has haunted his dreams for the last six years.

The characters -
Anne - not even sure where to start. I really enjoyed watching her battle with her insecurities. She didn't deny or debase herself -she found ways to confront and overcome. Really Really liked her
Zac - he is the guy all the girl's drool over, and why not? He is funny sexy and smart and owes Anne big time (not telling!)
The guys of Linear Tactical - I can not wait to read their stories! Each of them is so different in personality and we got a peek at their pasts which only made me want to know more. Great supporting characters
There are quite a few lead secondary characters that make an impact in this story and I see them also being prevalent in the future
The story-
Cyclone read at a pretty consistent pace, there was the occasional lull, but it felt necessary to set the scene and characters especially as this is a first in series. The plot was easy to follow and definitely kept me on edge - I did not see the end coming!
Excited to read more in this series - Would definitely recommend to anyone who enjoys second chance or small town romantic suspense
I acquired my copy via Hidden Gems  AMAZON

I should state for the record I am a big fan of the Dark series and have read every single release - and I might possibly also own them all 😉 I am saying this because to truly understand the story-line in Dark Sentinel  you should read  from Dark Legacy forward. IMO it will give the story more meaning and make the events a bit easier to follow. This release follows with the new "generation" of Carpathians who are settling in the united states as well as the Ancients, who I enjoy so much, who are also relocating.
Loraine - I got an absolute kick out of her - She is seeking her "Zen" trying to control her compulsion to anger first, ask questions second - Have to say she isn't doing so well. My heart feels for her at times but darn if she doesn't pull herself through (do not want to give plotlines). She is battling her past and her own feelings of inadequacy when she happens upon a murder in progress - well can't let that happen - IMO no matter how much "zen'ing" she attempts she will always jump head first into the fray of things.
Then we have Andor - Andor is like most of the ancients he has lived a long life and is contemplating facing the sun, passing into the next life with honor. That is until when he is at death's door and his world lights up with color - now he is fighting to survive for his life-mate.

A sweet romance that gave me the warm fuzzies- not a whole lot of "OMG" moments. Steady pace, easy to follow.  This for me was a slow read at times, it seemed to have lost some of the twists and on the edge adventures that I have come to expect with the Dark series
I do sort of miss the action we experienced in the earlier releases as well as some of the original characters, but I get that we must move forward (kind of like the Carpathians it is time to embrace the new era). Quick mention - we get to see one of the future couples and I have to say I am very excited to read their story.  AMAZON

I am probably the odd man out here but I am okay with that -
I am a big fan of Talbot's writing and Matteo (eventually) developed into a deliciously dark hate story - My problem was the beginning - The introduction to "how" and "Why" Natasha came to be was just a bit too jumpy and unbelievable for me. I am glad I did not toss it in the DNF pile if you can push yourself through the first few chapters and then kind of forget you read them you are in for one H e ll of a treat!
Bailey is the odd child in her perfectly crafted political family - different hair, different body - different dreams - but she does her best to blend in and be the "good girl" despite her self-absorbed mother and overly contemptuous sister.
Steven - Psycho stalker - can't say any more about him
Natasha - Hidden from the world by her mother - Discovered by her father -Bride to be for Satan
Matteo - I really am torn about his character - A true Sadist in every form - At no point do I think he felt even the least bit of compassion for his bride to be
Nicco - I want to know more about him he was the shadow to Matteo and something tells me he has a delicious story to tell
Once this story gets going there are so many well-definied characters and terrifically scripted scenes to keep even the most demanding of readers engaged and on edge - and the "OMG" moments, you will not even see them coming!
Matteo contains very descriptive scenes of torture (both physical and mental) AMAZON

✋ If you have not read the first book in the series
✋ If you are looking for a romance
This is book two in Wren's darkly twisted exceptionally slick not-a-romance story
Silent Captive starts pretty much where branded ended - without any thought to Wren's feelings our trio of Alpha's are relocating her to the beautiful room (seriously guys??)
Caspian - in the first book I truly believed he was redeemable, that he cared but in his own way - SOOO NOT the case!! I hope he drowns in his own fluids
Kiernan - I did not like him in book one and I hate him even more in book two - A true Sadist and if possible even more egotistical that Caspian!
Toby- Even I am shocked but if I had to choose one of the three and death was not an option then it would have to be Toby. Despite his unusual kink I truly believe that he loves Wren in his own sickly twisted and distorted version of reality
Wren - I get the mother wolf behavior and her forced sacrifice breaks my heart - I can not say how many times I wanted to jump into the story and wretch her and the boys free
The story - Wren mentions a "true love" I do not remember anyone from book one but the fact she is holding on to that memory leads me to hold out hope that someone is looking for her. She also mentions the loss of previous children for some reason this stood out for me as she mentions it more than once -I know breadcrumbs galore! As for one of her "children" that boy needs more than a knock upside his head!! This scene sent me into all kinds of emotional breakdown. I felt like we are being set up for a very disturbing plot twist - Toby's background? The missing "true love"? Caspian's tentative hold on above ground politics? The other Omega?
So many questions!
I need book three now!
This should be a known since this is the second book in the series but in case you have not read book one - just a reminder -this is NOT a romance - This IS a dark horror filled with depraved alphas with no sense of morality - it takes place in the realm of the Omegaverse (It is NOT reality) AMAZON

For You by Alexandra Silva

A breathtaking and beautiful journey that had me laughing, smiling and at times wiping those silent tears from my cheeks
It is the prequel to No One But You
All of the characters we love and a couple we would like to choke out are present and accounted for 😏
We accompany Dory and Pip as they journey through the ups and downs and sometimes sideways paths of life and love - and like real life, things do not always turn out as they planned but they find ways to move forward - to hold on to the good and learn from the bad
The story keeps a pretty steady flow and is easy to follow - the cast of characters is vivid - I felt so connected to them- you know when you catch yourself lifting your eyebrow at a character's comment, or smirking at something they did? yeah it was like that 😌
This is just one of those must-reads full of "lots of feels" kind of stories - Just go one click - I promise you will enjoy the journey 💖 AMAZON