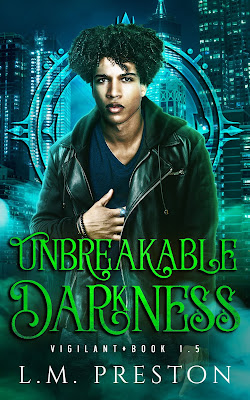 Blurb:
Dexter never looks for trouble, it finds him. Moving to a small city from New York wasn’t his idea of an improvement. His dream of being a groomed as a pro football running back ended the moment his father uprooted his family. Day one, he landed in jail without bail and realized too late that his father made a deal to get him out—one that would change his life, and put his family forever in danger. Unfortunately, finding love always happens at the worst possible time. Dexter didn’t realize that love could also kill. Again, trouble…it finds him, but this time he’d face it – head on, and hope he survives. Prequel to Scepter of Fire Book 2 in The Vigilant Series
Insatiable Darkness - Book 0
Caged Fire - Book 1
Unbreakable Darkness –Book 1.5
Scepter of Fire - Book 2
Buy Links:
Insatiable Darkness (Vigilant Book .5): https://amzn.to/2RgFajD
Caged Fire (Vigilant Book 1): https://amzn.to/2LUvJ3o
Unbreakable Darkness (Vigilant Book 1.5): https://amzn.to/2UmPHqX 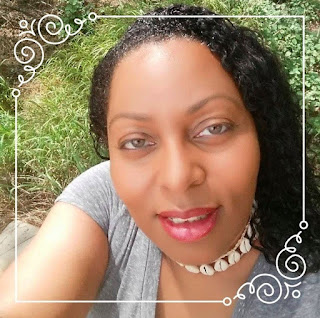 L.M. Preston, a native of Washington, DC. An avid reader, she loved to create poetry and short-stories as a young girl. She is an author, an engineer, a professor, a mother and a wife. Her passion for writing and helping others to see their potential through her stories and encouragement has been her life's greatest adventures. She loves to write while on the porch watching her kids play or when she is traveling, which is another passion that encouraged her writing.
Author Links:
Amazon: http://amzn.to/2vxZKx9
Goodreads: https://www.goodreads.com/author/show/3348681.L_M_Preston
Website: http://www.lmpreston.com/
Blog: www.lmpreston.blogspot.com
Facebook: https://www.facebook.com/LM-Preston-Author-Page-127604857259681/
Twitter: https://twitter.com/LM_Preston
Buy Links:
Insatiable Darkness (Vigilant Book .5): https://amzn.to/2RgFajD
Caged Fire (Vigilant Book 1): https://amzn.to/2LUvJ3o
Unbreakable Darkness (Vigilant Book 1.5): https://amzn.to/2UmPHqX

“Well, I hate to do this, but I am willing to let him go, with no charges if you can convince him to be an informant for me.”
“Excuse me?” Dex’s father responded, irritated.
“I know why you are here. Also, who you are working with and you are playing a dangerous game. I will stay out of that, but, your son is in the position to shed some light on this case and help your cause. There is something going on with the sports teams at that school. Kids going missing at the top of their prime, it’s frustrating we don’t know why.”
“I understand, but why would I put my son in danger to get you your answers?”
“Because it may help you get the answers you seek…for The Vigilant,” Detective Whalen whispered when he mentioned the last word.
“I’m not doing that. Would you put your kid in that kind of danger?”
“I’ve tried, but my son wasn’t good enough to be recruited by the elite on the team. He’s into other things, playing the guitar in a band. The Soul warriors have to be selected, it’s a process. Your son, he’s got what they are looking for, he’s strong, a bit impulsive, a fighter and not a detective’s son.”
Dex almost didn’t catch it, but had leaned in to hear every bit of their conversation.
“How about this, you put things in motion, my son doesn’t know he may be exposed to the information you seek. Let things play out, then if you need to question him, I’ll make sure he’s available for that.”
There was a pause of silence, “That’s fair and a good approach. The less he knows, the more likely he will be exposed too. You’ve got a deal.”
“And detective, don’t ever mention The Vigilant in my presence again. You can get my family and I killed if you do, and I fought too damned hard to be able to live to risk someone putting me and mine in danger.”
“Understood.”
Dex heard a slapping of hands and supposed they were shaking hands.
“Now, detective, can I see my son?”