🧐 OUR PICKS FOR THE WEEK OF 5/26 📚 Reviews and Recommendations 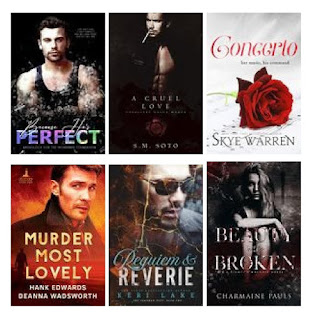 💖 OUR PICKS FOR THE WEEK 💖
📚  5/26/2019 📚
💙 Because He's Perfect by Anna Edwards
🙅‍♀️ A Cruel Love by S.M. Soto
🎶 Concerto by Skye Warren
🕵️ Murder Most Lovely by Hank Edwards
🏵️ Requiem & Reverie by Keri Lake
💎 Beauty in the Broken by Charmaine Pauls

Because He's Perfect by Anna Edwards

This is a collection of short stories and prequels by various authors. The overall theme of the anthology is "Emotional or physical disabilities and illnesses are nothing to be ashamed of; in fact they can make a man". Proceeds being donated to the Movember Foundation

I had the opportunity to read Inhibition by Dani René previous to the anthologies release. This is a Motorcycle Club Romance Prequel.

Adrian believes he is broken, emotionally and sexually. When his girlfriend walks away it is with the parting suggestion that he seeks help. When Adrian realizes he can not overcome his problem on his own, he finally caves and takes her advice. Which leads him to find himself in the presence of one very sexy Dr. Higgins.
Maybe he should have tried this earlier?

Scarlett has her own secrets to guard. She prefers to be on her side of the desk - protecting her secrets while feeling as though she is paying penance for her past mistakes. Everything is as it should be until HE walks in.
Maybe she should have walked away?

I should not have been shocked that I so quickly and completely found myself connecting with these two. Wanting to know where this goes, what they are hiding, and if they can find the strength to overcome it or will they destroy one another.
As it was meant to do - I need to know - I need to know now
Amazon

A Cruel Love by S.M. Soto

"Our love was deeper than the earth. Beyond this flesh type of shit. It was a cruel love, one I craved with every fiber of my being."
- Blossom

Blossom wasn't a kick arse heroine. She had zip for survival skills and a really bad habit of leaving her bodily fluids behind at crime scenes.
In other words, she was your average girl next door.
Percivale is a complete and total arse! I swear I can not count the number of times I wanted to deck him!

A Cruel Love had me cringing, then laughing then fuming mad. Percivale is truly without any sense of remorse. His way of handling things is permanent. I understand his past has caused some of his "issues", but it does not excuse his lack of compassion or empathy. I get the need for anyone in his position to be able to turn off their emotions to get the job done but Percivales' on switch seemed to be broken. Though I do have to admit his responses to certain, shall I say 'stimuli ?' , were quite entertaining.
Blossom responds as I am sure most of us would in this situation. Her past has some pretty dark skeletons of her own that she still fights daily to keep buried. As she truly blooms under Pericvales tyranny and handling I have to say she develops into one very worthy adversary.
These two are absolute opposites in every sense of the word.

Still really really dislike Arthur - Quite possible I even dislike him more than I did previously - The depths at which I loathe this man seems to be endless - Seems to be a theme here.

As with the others in this series, this contains scenes of violence, copious amounts of blood and other bodily fluids and a whole lot of " Oh hell no you didn't" moments that could be perceived as kidnapping or hostage-taking or ...
You get the idea.
Amazon

Concerto surpassed my expectations.
When we last left Samantha she was , IMO, still on the naive side and just beginning to get her feet wet with the explorations of emotional maturity that arrive with adulthood.
Not to mention we were left on a bit of a "What? Who? How?" cliffy.

In Concerto Samantha evolves. She becomes a force to be reckoned with not only on as a true prodigy but also on an emotional level. I thought this was the perfect culmination of previous events. The secrets she holds in that complex mind of hers not to mention the fire that now burns within the woman she has become.
It took some close calls for Samantha to realize that she needed to stand for herself but when she finally finds the strength - She was beautiful.

There was a lot, and I mean a lot, of plot twists and hidden agendas that were brought under the spotlight in Concerto. I was so angry with Liam and his stubborn self-flagellation and then Josh's behavior had me wanting to toss my kindle and WTH Henry?

I am not going to risk giving away any of the surprises that Warren has graced her readers with in Concerto
I will say
I need to know how this ends
I need justice
I need a new Kindle, I believe mine may have cracked during that last scene
Amazon   Nook

Murder Most Lovely by Hank Edwards

This was the perfect cozy small town mystery.
Michael is an avid reader, he loves his, mysteries. Being the town's mortician and the coroner has led to him coming across as quiet and a bit socially awkward - though when you get past the trappings he really is far from that description
Jazz is vocal, outgoing popular- Michael's complete opposite and his perfect match. Such a treat watching these two navigate the waters of their attraction. Really enjoyed the chemistry between them.

This was such an overall fun read. It had all the mishaps and shenanigans of a cozy mystery. A complete mishmash cast of characters that you would expect from a small town. A bit of a phobic sheriff who truly didn't have a mean bone in his body, A take charge get her done assistant who knows more than she lets on, a questionable kitty and that is just the tip of souls who reside in Lacetown.

The plot was tangled and had me going in circles grinning as each time I thought I figured out who done it I was once again thwarted!

I do hope we will get more from this cast.

We pick up right where we left off in Nightmares -
And if I felt misdirected in Nocturnes - Requiem kept me on a tilt-a-whirl
Everything falls apart for Voss, falls in place for the Sandman and just implodes for Nola and Oli.
Requiem held me on the edge - quite literally- from beginning to the 'OH my goodness so did not see that coming' end.
It took all my strength not to flip ahead and peek - I am serious, I even attempted to justify it to myself "you know it will have a HEA so you aren't spoiling anything" (don't judge). I am glad I wrangled my inner beast and read each heart-pounding white knuckling page.

Nola's world is turned inside out and upside down. There is always a choice and for Nola, it will be an easy one. Amidst her anger and despair, she finds a flicker of hope that she can make this right. But will her feelings cloud her judgment? Will one failure to act the part cost her everything she was fighting to save?

Be prepared this goes in a direction that I never ever saw coming - You thought you knew - you don't have a clue.

Lake did an Amazing job with The Sandman Duet. An intense and well-plotted thriller that has all the components that make a story five stars.
Amazon

Beauty in the Broken by Charmaine Pauls

Freedom - Restitution - Revenge
After spending 6 years behind bars -falsely imprisoned- Damian has had plenty of time to plan his revenge
First, he will take back what was stolen from him
Then he will collect his pound of flesh from all who thought to take what was his
And lastly, he would make her pay - Lina, the sweet girl with the innocent eyes who offered false comfort, who failed to believe, who lied.

This had me on edge throughout the story. I had to set down my kindle a couple of times, step back, calm my heart rate only to find an intense need to return to the story. This was a rinse and repeat for me from the opening scene to the closing - I couldn't relax - it was one gut twisting spine-tingling revelation after another - each time a truth was exposed another piece of the mystery fell into place. So many lies, so much angst, and loss all triggered by greed

I hated Damian for 97% of the story. He was so blinded by his vengeance he failed to see the truths that were glaring back at him. So many signs buried beneath his cruel adorations.
And Dalton- daddy dearest has some serious issues.
Then Lina - how did she survive?
Insane, sane, walking the line -
Where did she find that small sliver of hope?

I will say be prepared for a serious book hangover.
Expect moments of intense and sometimes overpowering emotions followed by an increased heart rate and even occasionally tightening of the chest.
Oh and let us not forget possible urges to throw your device, or scream in frustration.
A twisted tale of greed, lust, and possession.
Amazon  Nook  Kobo