OUR P👀KS THIS WEEK IN REVIEWS 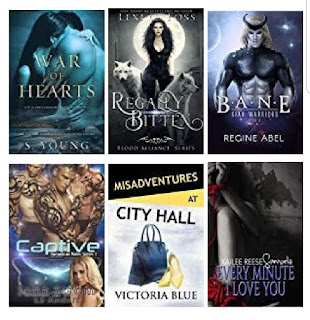 War of Hearts by S. Young

As always I am going to do my best to be spoiler-free.
I can't recall ever reading any of Young's previous works, but after reading the blurb for War of Hearts I knew I couldn't pass this one up.
Fantasy and Paranormal are my go-to genre and I have read a lot of different variations and visited some pretty creative universes but what Young offered?
A whole new universe that changed the paranormal game.
The story is a first in series and sets up the direction for future episodes. Young does a fabulous job of keeping the details exciting and keeping the reader engaged as she sets the foundation for this series.
Her characters were an absolute blast to journey with.

Thea is innocent in so many ways. Yes, she is one bad arse supernatural of unknown origin who has had her innocence cruelly ripped from her and lost those she trusted ( if you are a paranormal junkie you will most likely pick up on the clues but be careful which direction you lean toward). She has spent years running, hiding, living in fear - doing what she had to survive. When she is faced with being dragged back to her past she fights even if she has to leave a bit of carnage in her wake. She has no intention of bellying up for some stuffy holier than though werewolf mercenary.
Lawds I loved that girl.
Despite everything she has faced she still had a kind and caring heart - but don't let that fool you - I would NOT want to get on her bright side (pun intended - no, you have to read it!)

Conall sort of pissed me off in the beginning. He knew something felt off but he let his ego and well his emotions make his choices.
I get it but if he wants to play the better man card he can't pick and choose when it suits him best. I admit he has good reason to be arrogant but watching him get knocked down a peg or two - wholly entertaining

Conall agrees to acquire Thea in exchange for the cure to save his sister. I'm so wanting to rant about what a blind fool he is at this point but I won't 🤐 . So off he goes on a neck-breaking adventure.
What can go wrong? Right?
Strong Alpha vs evil bad girl... good always win. Yes?
🤣 Men

Loved the little back and forth between our h and H. They are both so darn stubborn.
The story line is solid, easily setting into motion future episodes
All the suspense and action I enjoy in an engrossing read with just the right amount of romance at the right time

I'm looking forward to seeing where they take us next.
Amazon

Howling hotness 🔥
Once again Foss has delivered!
I am ever amazed at this author's ability to bring her characters to life. Every time I open one of her books I am transported to another world. Her characters are so vivid so real.
They stay with you long after you close the pages.

Silas oh that lucky dog ... He won the Immortal cup and was chosen by the lichens!
All his life - this is what he has worked for - trained for -his dreams are coming to fruition.
Psych!
Turns out it was all a lie - immortality sucks!

Luna has been betrothed to Edon the misogynistic cruel self-absorbed next in line alpha of the Clemente Clan
So not happening!
But Luna has a trick up the sleeve that should ensure him refusing to claim her, releasing her from the mating. It will be worth her father's punishment heck even being cast out as a rogue would be better than being Edon's toy.
Oh, little wolf you couldn't be more misguided.
Turns out Edon likes his toys to be a bit difficult. More fun if they fight back.

Edon knows to ascend as Clemente's Alpha he must pass the trials and claim a mate. Luna has been predestined for him. Sealing a treaty between the two packs. He only needs her to ascend and to produce an heir. She is nothing but a duty.
He's ready for whatever his father can throw at him. It's his time to rule.
And he will at any price.

This is the third book in the series and again Foss nails it!
The connection between these three is flawless!
As a reader the transition from enemies to maybe more - from maker to lover- it was seamless. It felt right.

Sure I wanted to throttle Luna on occasion. Took her long enough to remove her blinders!
Ans Silas... Silas was the glue that brought them all together. He fit just perfectly. Just the right snark to be a pain in the flank but not so much that you wanted to beam him upside the snout

Edon so don't want to spoil that surprise.

You need to read the first two in this series to get the backstory and knowledge. Each story is an on the edge of your seat read that spotlights a pair (or triad in this case) of characters from within the running series.
This ends on an HFN
Amazon  Nook

I need a moment to dry my eyes
Don't fret they are happy tears - for now
I, like the rest of the Vanguard, know this war is far from over but we need to make the most of the small victories, the quiet moments, the precious memories.

Since the series began I have been in awe of the universe Abel created. Each new episode has only drawn me deeper into the story line. Endeared me more to the cast.

I knew Bane's story would be special. From the beginning, he stood out. And to pair him with Tabitha (not a spoiler it's on the blurb!) They are a perfect match. Bane carries the weight of the universe on his shoulders, walking a very sharp blade attempting to balance appeasing his "father" with protecting his family. And to find that the one soul that compliments his, that was made for him, that truly completes him - can never be his?

Tabitha has been the b! Tch queen from the beginning. It has taken her years to come to terms with her feelings, to mend her broken heart. She has come so far since the first episode. We get a chance to see the true Tabitha here. The one who once laughed and loved wholeheartedly. It is a big 360 form the vicious little ankle-biter she has been. Sorry Tabs.

It's hard to review without spoilers all that happens in this episode.
I do not want to decrease any OMG factors or Awww moments that you may encounter.
You can expect quite a few " Oh he ll No" scenes interlaced with a few that may have you yelling " turn around!" or other various explicit s out loud
I shed a few tears both happy and sad - experienced some chuckles and I smiled - a lot!
Best of all I was there to witness and feel each moment
I think for me that is what makes this series so captivating
Abel transports her readers into the story
You don't just read it
You experience it
Until the next battle - to the little victories 🥂
Amazon

I wish it was longer 😕 I know it's only the first in the series... but I want more!
I honestly wasn't sure what to expect going in but I never should have doubted Anders's ability to captivate and entertain.

Ivy wakes to find herself in a bit of a predicament. After careful analysis, she decides it's better to go with the monster who might be familiar than the one looks like it could star in its own horror film. Ivy has some pretty strong character traits she knows she is so in trouble and she is quick to analyze and act. I think I would have been screaming in the corner.
And Natu... sigh.

I admit I have so so many questions!
How? WTH? Why? Where? BUT? What?
I need my questions answered!
Normally this would bother me but knowing this is just the start of Ivy's journey and that eventually all my questions will be answered not only placated me but in a way that heightens the mystery and suspense. It is like dangling on a cliff by my fingers but having the rope within reach.
For me, it was the way the characters, even though they are just touched upon, somehow felt...significant? It is hard to explain.

This does have a bit of dub con and questionable con- so if you have a problem with that you might want to skip this
For those who enjoy an alien adventure that isn't quite a romance (yet) with lots of unknowns, a witty heroine and let us not forget a few smexy alien interludes then this just might be for you
Amazon

I am not even sure how to word this -
Just know going in that you will laugh, get angry, maybe shed a silent tear here and there most of all you will experience that one moment when you know anything is possible.

Skye has always been so driven so focused on her goals sometimes to the point that she might be labeled (okay fine she has been labeled) an absolute b! tch
And she is okay with that.
She is okay that everyone judges her.
It's fine that she doesn't have that special someone who appreciates her for, well her.
It's fine.. .really

Kyle
A substantial meal for one night.
A little moment for Sky to unwind and let go.
She has no illusions of grandeur or forever's - just one night.
Turns out Kyle wants a lot more than just a night.

I enjoyed Kyle he was so sure of himself at times a bit arrogant but he also had that marshmallow goodness that just drives me insane.
There is so much more to Sky than what people choose to see. Even I was a bit guilty in Book-boyfriend of judging her a bit harshly.

Sky and Kyle are a perfect fit, well once they work out the whole opposing thing. The back and forth between them just made the whole journey that much more.
More fun. More meaningful.
Just more.
Amazon  Kobo  Nook  Google

Every Minute I Love You by Kailee Reese Samuels

Since this is part of a series - a very emotionally intense series - It makes it a bit hard to review the book in detail as I do not want to give away any spoilers.

If you have not read the previous books in this series - Stop -
To fully experience as a reader the depth of love these characters have for one another - the trials they have faced - the sacrifices they have made - you need to start at the beginning.

Kailee Reese Samuels takes her readers beyond the written word.
I know when I pick up one of her stories I will not be the same when I set it back down.
Yes, her writing is that powerful.

I think this may be the most intense and emotional journey of all of her books to date.
When I set the book down after reading the last line - I was emotionally exhausted.
Amazon