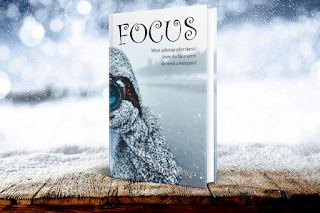 Professional photographer Dana Secrest has a secret and doesn’t even know it. When she storms from her best friend’s home on Christmas Eve-not the wisest decision she’s ever made - security contractor Sam Galdicar follows her to save her from her own hot temper and impulsive action. Upon arriving home, Dana discovers her apartment has been ransacked. Then an attempt is made on her life. She doesn’t know who’s trying to kill her or why, but Sam is determined to protect the woman whose eyes don’t need a camera to see the truth.

This enemies-to-lovers, billionaire romance contains some explicit content that may be unsuitable for readers under 18 years old.

Excerpt 1 – Dana
Not for the first time, I regretted the choice to move to Chicago. I ruminated over my freelance business and thought that I’d managed to accumulate enough in savings to tide me over for a few lean months. I was earning enough to move back home to St. Paris, a minute speck of a village in southwest Ohio. I’d grown up in St. Paris, where the still-depressed economy hadn’t recovered like most of the nation and property values were low. I could buy or rent a place for less than I paid for my cheap apartment in the big city.
And breathe clean air.
A hand landed on my shoulder and spun me around. I gasped, shrieked, and struck out with both fists. Unfortunately, I’d never learned how to fight properly, so my assailant had little trouble avoiding my wild blows and restraining me.
“Where in the hell do you think you’re going?” Sam Galdicar growled as I struggled against his grip.
“Let me go, you goon,” I growled back at the big, burly bodyguard to handsome, occasionally charming, and always domineering gazillionaire Bradley Vermont. His hands tightened and I sneered, “Or are you going to beat me like Brad beats Sonya?”
Either the words or the withering tone had the desired effect and he released me. I stumbled a step, turned around, and resumed walking.
“He doesn’t beat her,” Sam said as he fell into step beside me.
“Like hell, he doesn’t,” I retorted and muttered a profanity that insulted the man’s parentage and character and would have resulted in my mouth being washed out with soap if Dad were around to hear the vile words.
“He doesn’t isolate her from her friends and family,” he added, trying to soften my harsh opinion without success. “If he did, you’d never see her.”
We stopped at a crosswalk. I glanced at him. With his butter colored hair, square jaw, and cleft chin, he didn’t offend a woman’s eyes. His masculinity was rugged rather than pretty.

Excerpt 2 – SAM
I handed her the shirt, “Here, put this on.”
She clamped the towel to her chest with one arm and reached with the other to take the shirt. “Turn around, Sam.”
I stood there and grinned, enjoying her discomfiture. It wasn’t nice of me.
“Please,” she whispered.
I turned my back to her and wished I’d thought to install a mirror above the bureau.
“Okay,” she said in a dull voice when she was ready.
I turned around and felt a possessive sort of satisfaction at seeing her wearing nothing but my shirt, clothed in only what I gave her. But her dull expression issued no invitation.
“You’ll sleep here tonight,” I said.
Her hazel eyes narrowed with suspicion. “And where will you sleep?”
“Here. It’s my bed.”
She struggled to her feet. “I can sleep on the sofa.”
I shook my head. “You’ll do no such thing. You’re still chilled through.”
“I don’t trust you, Sam.”
I blinked in surprise. Her distrust infuriated me, but I admired her forthright honesty. Looking into her eyes, however, I saw fear. That alone stayed any angry words. Putting a finger under her chin and tilting her face to meet my gaze, I said, “I’ve already seen and touched you and I didn’t molest you, now did I? Trust me, Dana. I won’t do anything you don’t want.”
“Hah.”

Excerpt 3 – Dana (2)
I sighed. “I suppose you have a dossier on me and know pretty much everything about me.”
“Of course,” he replied. “I’m extremely good at what I do.”
“And so am I,” I retorted. For an insane second, I wished I had my camera so I could capture him: The Arrogant Male at Breakfast. With that square jaw, those twinkling eyes, and that proud expression, he would have made a fortune gracing the covers of romance novels. I could see him doing particularly well garbed in period costume.
“Do you have any tattoos?” I asked.
His eyebrows went up, a sign that my question had surprised him. I wanted to preen at the accomplishment. Then his small smile broadened and his gaze turned sultry.
“Wanna see them?”
I kept my cool demeanor and met his gaze without melting. “There’s a studio in the city that specializes in custom cover art for a couple of the big publishers. If you’re looking for a side gig, you’d do well as a cover model.”
“You think I’m handsome?”
I huffed. “You know you’re pretty.”
“Pretty?” he echoed, looking offended.
“Pretty,” I said with a curt nod, pleased to have disconcerted him. He wasn’t the only one who could needle someone. I’d die before admitting that he made Henry Cavill look like a troll.
“I don’t need a ‘side gig,’” he muttered under his breath.

Anyone who’s been a freelance writer or editor for more than 10 minutes knows that far too many people undervalue (or completely devalue) the skill, time, and effort required to produce well-written content. It’s hard work, folks.
Writing for Pay
Go to any freelance platform (e.g., Upwork, Fiverr, Guru, etc.) and you’ll find solicitations and bid requests for writers to produce “error-free” work with “perfect grammar” for poverty wages. Sure, being offered $125 to produce 15,000 words might not sound all that bad, until you break it down.
Research shows that it takes approximately 3 hours and 20 minutes for the average writer to draft, review, self-edit, and revise 1,000 words of content. That’s an average. You may produce good content faster or slower; however, it’s useful for calculating per-hour wages.
Using that average, let’s calculate how much time that 15,000-word novella will take. For mathematical ease (because math is not my forte), I’ll use 3 hours and 15 minutes, or 3.25 hours, as my average time to produce 1,000 words of polished content. Here’s the calculation (15 [units of 1,000 words]  3.25 hours = 48.75 hours). That 15,000-word novella will take 48.75 hours to produce.
The typical, full-time work week is 40 hours. That $125 fee works out to a wage of $2.56 per hour ($125  48.75 hours = $2.56 per word).
Now, let’s deduct the platform’s 20% commission, which leaves you with 80% of the fee paid. (Oh, forgot that, didn’t you?) Instead of being paid $125 for that 15,000-word novella, you’ll be paid $100 ($125  80% = $100). That, of course, reduces your hourly wage on this project to $2.05 per hour ($100  48.57 hours = $2.05 per hour).
Would you work for that?
We can break down the fee on a per-word basis. For that 15,000-word novella, you’d be paid $0.008 per word before the platform skims its commission from the fee. After the commission is deducted, you’d earn $0.006 per word. In either case, that’s less than one penny per word.
Again, would you work for that?
I won’t.
Whether a freelance writer charges by the word or by the hour, knowing how to calculate the value of time, skill, and effort leads to ignoring or turning down a host of projects with unreasonable deadlines and insulting budgets.
The Cost of Editing
Now that we’ve established a range of acceptable value for freelance writers, take note of professional editing fees. Refer to those same sources. These rates surprise authors, especially indie authors new to publishing. Like writing, editing requires sophisticated skills and expertise that have value.
Editing speed varies greatly depending upon the quality of the written content, the editor’s skill, and the type of editing performed. One article written by an editor “guesstimated” an average editing speed of 1,500 words per hour as a reasonable baseline to calculate fees. Use the same simple math to figure freelance writing rates to figure freelance editing rates.
For instance, if you’ve got a 50,000-word manuscript to be edited, expect the editor to work 33.3 hours on the manuscript (50,000 words  1,500 words/hour = 33.3 hours). Offering a professional editor $100 to edit the manuscript values his time, skill, and effort at $3.00 per hour or $0.002 per word.
Quite frankly, I won’t work for that and neither should anyone else.
Facing Reality
Somewhere I saw statistics showing that fewer than 10% of authors (even less for self-published authors) earn more than $1,000 per year in royalties off books sold. With over 1 million new titles published each year, competition for readers and their money is fierce. Producing one full-length novel to professional standards often means operating in the red. To be blunt: you’re not going to recoup your investment.
Offering lowball fees for skilled work devalues the service you’re trying to hire. Accepting low-bid fees for your skilled work devalues the service you provide. Understand the value of the work and uphold it. That may mean saving up for months or years to hire a professional editor or ghostwriter.
To determine whether your valuation of service coincides with industry standards for professionals, check the Editorial Freelance Association and The Balance and ClearVoice. Such sources offer professional freelance writing and editing rates in ranges, with the lower ranges for beginning vendors and the higher rates commanded by experienced, expert professionals.

Holly Bargo never outgrew a love of fairy tales, legends, and myths. Or horses. However, one foot must remain firmly planted in the real world where Holly makes her living as a freelance writer and editor. She and her husband have two grown children and live on a southwest Ohio hobby farm with a menagerie indoor and outdoor animals.

Holly enjoys hearing from readers and other authors and may be contacted via the Hen House Publishing website: www.henhousepublishing.com.

When she's not working on other people's documents or reading, Holly finds time to transfer the voices in her head to paper ... er ... computer. If she doesn't, there's a definite possibility her mind will explode.

And for those who might wonder from where the pseudonym of Holly Bargo came, it's quite simple really. Horses. Namely an elegant and temperamental Appaloosa mare who has long since crossed the Rainbow Bridge and is fondly remembered for guarding toddler children and crushing a brand-new pager.