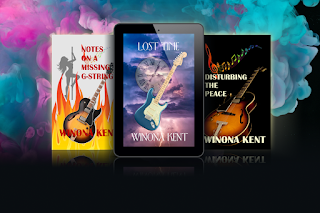 In 1974, top UK band Figgis Green was riding high in the charts with their blend of traditional Celtic ballads mixed with catchy, folky pop. One of their biggest fans was sixteen-year old Pippa Gladstone, who mysteriously vanished while she was on holiday with her parents in Spain in March that same year.

Now it's 2018, and founding member Mandy Green has reunited the Figs for their last-ever Lost Time Tour. Her partner, Tony Figgis, passed away in 1995, so his place has been taken by their son, professional jazz guitarist (and amateur sleuth) Jason Davey.

As the band meets in a small village on the south coast of England for pre-tour rehearsals, Jason's approached by Duncan Stopher, a diehard Figs fan, who brings him a photo of the band performing at the Wiltshire Folk Festival. Standing in the foreground is Pippa Gladstone. The only problem is the Wiltshire Folk Festival was held in August 1974, five months after Pippa disappeared. Duncan offers Jason a substantial sum of money to try and find out what really happened to the young woman, whose mother had her declared officially dead in 1981.

When Duncan is murdered, it becomes increasingly clear to Jason that his investigation into Pippa's disappearance is not welcome, especially after he follows a series of clues which lead him straight back to the girl's immediate family.

But nothing can prepare Jason for the truth about Pippa, which he discovers just as Figgis Green is about to take to the stage on opening night—with or without him. 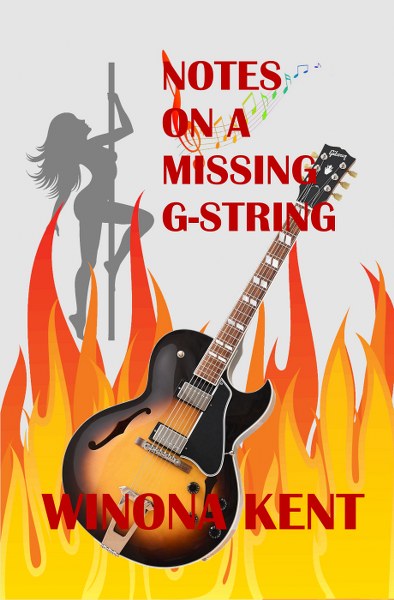 "A highly entertaining caper set in a sleazy London underworld...Jason is a well-crafted reluctant hero, and Kent’s writing is slick and engaging throughout." - Kirkus Reviews

The first time we met Jason Davey, he was entertaining passengers aboard the Alaska cruise ship Star Sapphire, Eight ‘til Late in the TopDeck Lounge.

Then he came ashore, got a gig playing lead guitar at London’s Blue Devil jazz club, and gained a certain amount of notoriety tracking down missing musician Ben Quigley in the Canadian north.

Now Jason’s back again, this time investigating the theft of £10,000 from a dancer’s locker at a Soho gentlemen’s club.

Jason initially considers the case unsolvable. But the victim, Holly Medford, owes a lot of money to London crime boss Arthur Braskey and, fearing for her life, has gone into hiding at a posh London hotel.

Jason’s investigation takes him from Cha-Cha’s and Satin & Silk (two Soho lapdancing clubs) to Moonlight Desires (an agency featuring high class escorts) and finally to a charity firewalking event, where he comes face to face with Braskey and discovers not everything Holly’s been telling him is the complete truth.

As he becomes increasingly drawn into the seamy underside of Soho, Jason tries to save Gracie, his band-mate’s 14-year-old runaway daughter, from Holly’s brother Radu, a ruthless pimp, while at the same time protecting Holly herself from a vengeful Braskey—nearly losing his life, and Gracie’s—in the process.

Notes on a Missing G-String is the first novel in a new mystery series featuring jazz musican-turned-sleuth Jason Davey. 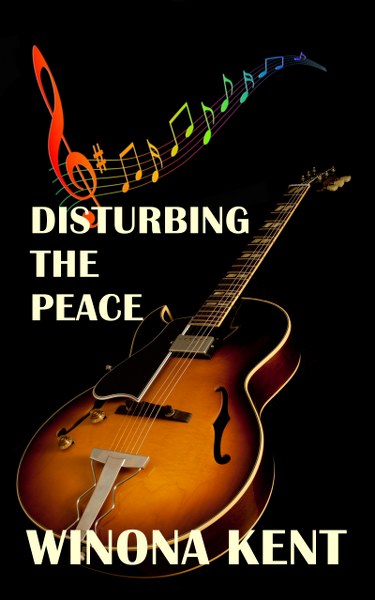 Jason Davey's last job was aboard the Star Sapphire cruising from Vancouver to Alaska. Hired as one of the ship's entertainers, he played guitar in the TopDeck Lounge. You can read about those adventures in the novel Cold Play here.

Now Jason's back on shore, and he has a regular gig at a jazz club in London.

Jason's son, Dominic, is studying film at university. When Dom asks his dad to help track down a missing musician for a documentary he's making, Jason leaps at the chance.

Ben Quigley played rhythm guitar in Jason's parents' folk group Figgis Green in the late 1960s. And he dropped off the face of the earth four years ago.

Jason's search ultimately takes him to Peace River, Alberta - 300 miles from Edmonton in the Canadian north. And what he discovers there is both intriguing - and disturbing.

Disturbing the Peace is a novella which introduces readers to professional musician and amateur sleuth Jason Davey. Jason will soon feature in a new series of full-length mystery novels, beginning with Notes on a Missing G-String.

Can you, for those who don't know you already, tell something about yourself and how you became an author?

I was born in London, England and grew up in Regina, Saskatchewan, where I completed my BA in English at the University of Regina. After moving to Vancouver, I graduated from UBC with an MFA in Creative Writing. More recently, I received my diploma in Writing for Screen and TV from Vancouver Film School.

My writing breakthrough came many years ago when I won First Prize in the Flare Magazine Fiction Contest with my short story about an all-night radio newsman, Tower of Power.

My short story Dietrich's Ash was an Okanagan Short Fiction Award winner and was published in Canadian Author & Bookman, anthologized in Pure Fiction (Fitzhenry & Whiteside) and broadcast on the CBC Radio program Ambience.

My short story Creatures from Greek Mythology was a Second Prize Winner and WQ Editors Prize winner and was published in Cross-Canada Writers Quarterly.

My spy novel Skywatcher was a finalist in the Seal Books First Novel Competition and was published in 1989. This was followed by a sequel, The Cilla Rose Affair, and a mystery/adventure, Cold Play, set aboard a cruise ship in Alaska.

After three time-travel romances (Persistence of Memory, In Loving Memory and Marianne's Memory), I returned to mysteries with Disturbing the Peace, a novella, in 2017 and the novel Notes on a Missing G-String in 2019, both featuring the character I first introduced in Cold Play, jazz musician / amateur sleuth Jason Davey.

The second novel in my Jason Davey mystery series, Lost Time, was published on August 31, 2020.

I've been a temporary secretary, a travel agent and the Managing Editor of a literary magazine. I recently retired from my full-time job as a Program Assistant at UBC's School of Population and Public Health. I'm currently the BC/YT/NWT rep for the Crime Writers of Canada and I live in New Westminster, BC, where I am happily embracing life as a full-time author.

What is something unique/quirky about you?

I ran a completely illegal fan club for the Monkees when I was 12 years old, and I ran a semi-official website for the actor Sean Bean between 1995 and 2012.  You can still visit the website, although it is no longer updated.

As an offshoot to that – I'm the person responsible for inventing the original “Death by Cow” list of all of the films, tv shows and stage productions in which Sean Bean's characters die. You can see it on the website!

Tell us something really interesting that's happened to you!

My dad was a travel agent so when we immigrated to Canada in 1957, we flew on an airplane – a Super Constellation – unlike most immigrants who came by ship. We managed a few trips back to England after that, and those were always by ship, because, being in the business, my dad got a great discount. I sailed on five different ocean liners between 1957 and 1968 – an Italian liner called the Homeric (which has a guest mention in my novel, Lost Time); a little Dutch ship, the Ryndam (the ancestor of the current megacruise ship Ryndam, owned by Holland America); the Empress of England (a lovely little liner owned by Canadian Pacific); her sister, the Empress of Canada (the inspiration for the Star Sapphire in my novel Cold Play); and the Queen Mary. The original Queen Mary. The one that's sitting in the drydock at Long Beach, California. I sailed aboard her when I was seven years old and although my memories are a bit patchy, I do remember the splendour of our cabin (it was all dark wood panelling and green silk bedspreads) and the uniqueness of having a bath-tub with an optional salt-water tap. I also remember being very seasick and throwing up at the dinner table (I was mortified).

My love of old steamships dates back to these voyages. It's a little known fact, but Jason Davey (my amateur detective in Lost Time) was actually conceived on board the Queen Mary during a voyage his parents took to the U.S.

Where were you born/grew up?

I was born in Hampstead, which is a northern suburb of London, England. I spent my first three years there, and then I immigrated with my parents to Canada. I grew up in Regina, Saskatchewan, where my dad was the manager of a travel agency. I got my BA in English from the University of Regina. I met my husband in Regina (he was a radio newsman), and then we moved to Winnipeg for a few years, then back to Regina, then Moose Jaw (anyone who is anyone has lived in Moose Jaw at one time or another!) and then we finally moved out to the west coast (Vancouver) where I've lived for the past forty years or so.

What are you passionate about these days? What do you do to unwind and relax?

I've put these two questions together because they involve the same things!

I'm absolutely passionate about my writing. I always have been. But I retired from working last year (in a job unrelated to writing) and now I finally have all day to indulge in my passion. I am a full-time writer at last! Oddly enough, my stories also help me to unwind and relax. If I don't do some research, or some creative work on my novels, I tend to get very tense and bad-tempered. I need my writing fix!

My other main passion is family tree research. So far I've discovered about 7,000 cousins :-) Most of them are very distant, and there's also a huge mystery as to where my great-grandfather came from. I have no idea who his real parents were, where he was actually born, and whether he had any siblings. I've done the DNA test and that's created even more of a mystery! So I spend a lot of time digging through my distant cousins' family trees to try and find links and common family members. It's a bit like writing a mystery – and you'll see that I've used my knowledge of how family tree research sites work to help Jason solve the mystery of Pippa Gladstone in Lost Time! 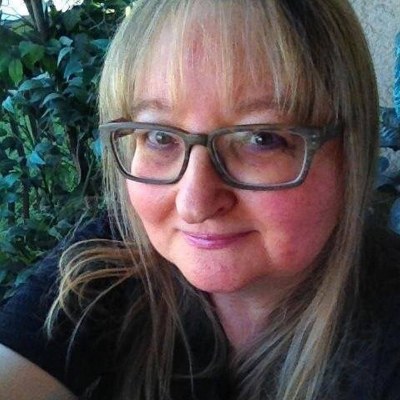 Winona Kent is an award-winning author who was born in London, England and grew up in Regina, Saskatchewan, where she completed her BA in English at the University of Regina. After moving to Vancouver, she graduated from UBC with an MFA in Creative Writing. More recently, she received her diploma in Writing for Screen and TV from Vancouver Film School.


After a career that's included freelancing for magazines and newspapers, long and short fiction, screenplays and tv scripts, Winona has now returned to her first love, novels. She lives in Vancouver, Canada.
Writing is Winona's passion.

$10 Amazon giftcard, ebook set of the series – 1 winner each