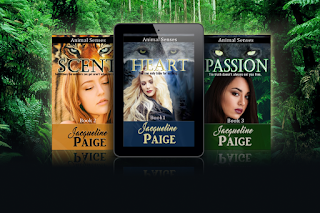 She crept back out of the room being careful to not make a sound, debating for half a second whether she should close the door or just leave it.
She left it. Every instinct was telling her to get out of there, fast.
Rayne left Chicago that morning, with a random poke a map sending her, wholly unprepared, into the wilderness. Needing a place to regroup and find a new direction, she could never have imagined what she’d find in a remote Ontario town.
Reclusive lone wolf Devin guards his isolation and solitude while he avoids taking his rightful place in the pack. Painting and avoiding his mother’s phone calls occupy his waking hours until Rayne appears, smelling of flowers, hiding secrets, and awakening his wolf.
Changes are coming for Rayne, and her ignorance of the world she knows nothing about save fiction stories soon come clear as danger approaches and choices must be made.
** Only .99cents!!**
Goodreads * Amazon

Sometimes the answers you get aren’t what you asked.
The world can tilt a bit and throw you off balance, just enough that you have to stop and make some adjustments.
When Kelsey comes home, she finds out her entire life and everything she thought she knew is a lie.
When her world spins out of control and flips in more directions then she could ever count, she struggles to right it again.
Goodreads * Amazon

The truth doesn’t always set you free.
Trained as a healer since childhood, Shaelan never realized why no one ever moved from her village or visited. Something wasn’t quite right, but it wasn’t until she saw the truth with her own eyes that she realized.
She couldn’t live with how things were. But does she have the strength to make the changes necessary for her people to live in peace?
Sometimes discovering the truth also means facing all that is wrong, even in your own life.
Goodreads * Amazon

Every waking moment is research to a fiction writer.
I’ve had conversations with readers and was a little shocked to learn what people thought fiction writers do.  Apparently because we write ‘make believe’ it is thought that we just randomly pull something out of our imaginations and slap it on paper.  Oh my, how I wish it were that simple or that my imagination was that fabulous.
Yes, we make things up and spin them into a story, but if a part of the invented pieces aren’t relatable, who is going to keep reading?  Okay, occasionally I’ve fallen into a story so crazy it screamed ‘could never happen in any sort of way’ when I needed to shut off all possible traces of reality.  The downside to that was at the end I was left feeling melancholy, with no connection to the characters or story.  Most readers want to feel what the characters do, they want to root for the underdog and cheer when they kick butt and come out on top.  So how does a fiction writer do that?
It’s simple, every waking moment is research. What does this mean?  For me it torments the people I know and meet.  Those around me know when I get this look on my face and seem to be studying them or someone else that I’m taking a little piece of their personality or actions and storing it to incorporate into a character or scene.  I must do that a lot because many of them warn people “Be careful or you’ll be the one she kills in her next book.”
When the idea of Heart came to me I was actually up North at a remote camp ground.  The parts of the book that came from ‘research’ (aka personal experience) are the drive – the endless tree, lakes and rock.  I felt what Rayne felt while she was trying to get far enough away from her ex.  Seeing nature at its upmost finest, wild state was wonderful – for the first few hours.  The storms and rain are also from experience.  I have never seen so much rain in such a short time before.  Honestly we could have canoed around the camp ground at some points.  (This was also the last year I “roughed it” in tents. Its cabins all the way for me now.) The sounds of nature and awe of the forest growth are also very much real in Rayne’s scenes.  I’ve always been in the country and an outdoor person, but the first few visits up North (as an adult) where the wild hasn’t been tamed, will always be stored in my memory for future reference.
Unfortunately, I haven’t been close to a wild bear since I was a child, so I didn’t have the reference to put it in the book. I really wanted to encounter a bear, up close and personal on one of our trips, just so I could relate to it. My family however was quite happy I didn’t get to add that little piece of research to my list.  Maybe next time.  
Thanks for having me here today!!

Jacqueline Paige lives in Ontario in a small town that's part of the popular Georgian Triangle area.
She began her writing career in 2006 and since her first published works in 2009 she hasn't stopped. Jacqueline describes her writing as "all things paranormal", which she has proven is her niche with stories of witches, ghosts, physics and shifters now on the shelves.
When Jacqueline isn't lost in her writing she spends time with her five children, most of whom are finally able to look after her instead of the other way around. Together they do random road trips, that usually end up with them lost, shopping trips where they push every button in the toy aisle, hiking when there's enough time to escape and bizarre things like creating new daring recipes in the kitchen. She's a grandmother to four (so far) and looks forward to corrupting many more in the years to come.
Website * Facebook * Twitter * Instagram * Amazon * Goodreads