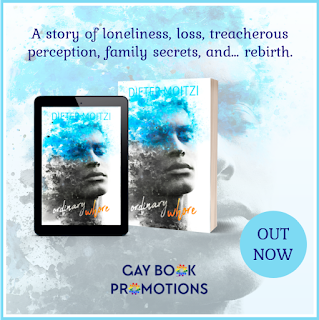 It is a standalone book.

People tell me I should count my blessings. “You’re handsome, Marc,” they say, “handsome, rich, young, and intelligent.” But then, given time and opportunity, people would always say inanities, I think.

Am I handsome? Honestly, I don’t know, but it seems so; handsome enough, at any rate, that I’m allowed to live comfortably off my looks. I’m not rich, mind you, but the men and women paying for my company fling enough crumbs of their wealth my way. I’m still fairly young, too, but since when is youth anyone’s personal achievement? Last but not least, I’m not sure about my intelligence. I’m not even sure being intelligent would be a blessing.

Anyway, I can’t complain—my life is not unpleasant. I’m a bit bored, a bit melancholic, my mood often as black as the clothes I wear all the time.

And now my father has died. It shouldn’t mean anything to me—for years we tried to have as few ties or dealings with each other as possible. But all of a sudden, everything comes crumbling down, and my life turns into an unwholesome mess…

—107—
He is just that guy. In his sixties, balding, short and slender; some would even say gaunt. His skin is white and papery. Thin lips, thin features, a jaded attitude. His eyes are… wait a second… grey? Yes, grey, I think, the shade of light-coloured steel, and his gaze is cold but not too cold. He is no man of extremes; a nondescript guy in fact who looks like an accountant or a small-town solicitor.

Someone of little interest or concern for me, more present in the media than in my thoughts.

And yet, by one of those strange, sly whims that destiny seems to love, that guy is my father.

Or rather, that guy was my father. Because he is dead now.

—106—
My older sister is the one who spills the beans. It’s half past nine in the evening. I’m sitting on my white sofa, turning the pages of a fashion magazine, my gaze empty like the faces of the models who are striking poses on the glossy pages before me. Gentle boredom seeps in through the half-open windows, glides over the walls, oozes from every piece of furniture, glistens on the glass or metal surfaces, forming a motionless, invisible, indolent space-time that surrounds me like a halo.

I’ve switched the television on but turned the volume down to a subdued whisper. The soft sounds of a TV game blend with the persistent hum of the traffic downstairs. From time to time, I lift my eyes from the magazine to look at the game host’s white-toothed smile, which seems as genuine as a handbag purchased from a street vendor in Italy. I don’t really follow the show; it is just a means to drown the mortal silence of my apartment. My other choices would have been to listen to the unutterable sadness of a Mahler symphony, or bear the silent cries of my immaculate walls.

That’s when the phone rings.

I pick it up and recognise Raphaëlle, my older sister. Apart from sounding breathless, she is the same as usual. Her vocabulary remains precise, her weary and cold inflections suggesting that we are not on earth to have fun but for other purposes, none of which very pleasant. That’s her in a nutshell: unfazed, unaffected, wintry. Imagine an emotionless automaton. Well, I’m speaking of so-called positive emotions, of course. She knows how to be curt and authoritarian. She knows how to throw an angry fit if needs be.

“Hi Marc. It’s Raphaëlle,” she says. Then, without further ado, she tells me the news. She is staying with our mother, because the old man died.

“Let me think… Two days ago. Or was it three? I don’t know. You want me to ask Mother?”

“No, don’t bother. I’m simply surprised it wasn’t announced on the news yet. Where is she now? Mother, I mean.”

“In the kitchen. Said she was feeling peckish.”

“Opening a new bottle, you mean. I should’ve known. Nice try, though…” I trail off, my brain blank for a second. What should I say now? Am I supposed to condole Raphaëlle? Would that be the appropriate next step?

I don’t want to make a mistake, so I ask, “Do I need to come over? I suppose there’ll be a funeral, right?”

“Of course.” My sister makes a strange noise, something between dry laughter and a sniff. “One doesn’t say funeral,however; one prefers to say obsequies, brother dearest. I even brought my pearls for the occasion. One needs to be glam, you know. But you don’t sound eager to join us.”

“Are you kidding me? To be filmed during Father’s—obsequies, is it?— why, nothing could enchant me more.”

My sister sighs. “Marc, spare me your sarcasm, okay? The funeral takes place the day after tomorrow. It goes without saying that you should assist. But if you prefer to stay away, no problem. Do what you want. You’re free, after all.” Her voice remains monotonous.

“All right. I’ll check the train schedule,” I reply. “And call you back sometime tomorrow. Is that okay?”

I notice how peculiar her voice sounds, hoarse and croaky. “What’s up with you?” I ask, incredulous. “Don’t tell me you’ve been weeping!”

“Don’t be ridiculous! It’s just that… it’s bloody freezing in this house. I guess I’ve caught a cold. That’s all.”


You can read another excerpt on the author’s website.
About the Author
Born in the early 70s, I grew up in a little village in Austria. At the age of 18, I moved to Vienna to get my master’s degree in Political Sciences, French, and Spanish. Today, I’m living in Paris, France, with my boyfriend and work as a graphic designer.
In my spare time, I write, read, cook fancy recipes, take photos, and as often as I can, I travel (Italy, Portugal, Morocco, Egypt, the UK, and many more places). My literary tastes are eclectic, ranging from fantasy, murder mysteries, gay romances to dystopian novels, but I won’t say no to poetry or a history book either. I’m more a hoodie/jeans/sneakers kind of guy than a suit-and-tie chap.
So far, I’ve published two short-story collections as well as four poetry collections. My first murder mystery novel “The Stuffed Coffin” has been released on January 6, 2019 and is also available in German and French. The French version has won the prestigious French Gay Murder Mystery Award 2019 (Prix du roman policier – Prix du roman gay 2019). My second novel “Till Death Do Us Part” was released on June 24, 2020. You can also find me on Rainbow Book Reviews, where I write book reviews under the pseudonym of ParisDude (for French reviews, have a look at my review site livresgay.fr).