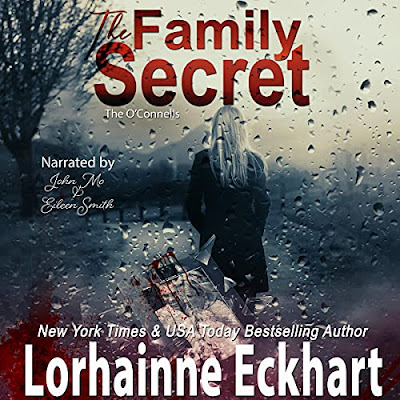 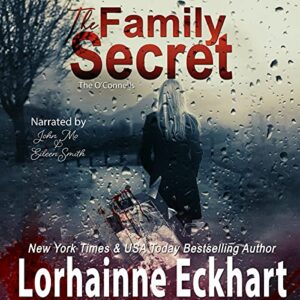 Just what is the mystery behind Raymond O'Connells disappearance? NY Times and USA Today best-selling author Lorhainne Eckhart brings you The Family Secret, an O’Connell family novel, when a body is discovered at the edge of town, rumors, circumstantial evidence, and a chance for revenge lead to one family member’s arrest, and an all out effort to take several other O’Connells down as well. “Wow what drama, what tension, what suspense.” (Susan Jordens) “This was a very explosive and heart wrenching story. A body is found and the DA is out for blood. As long as it's O'Connell blood, he doesn't much care whose.” (KEC200) Raymond O’Connell was the love of Iris’s life - from the day she met him, to the day a year later when she married him, to the tragic night before she never saw him again. Some would say they had the perfect all-American life. Now, 18 years later, questions arise about the night her husband disappeared, leaving a bloody knife and a letter addressed to her, in which he said goodbye and told her not to look for him, with not even a second thought for her and their six children.

New York Times & USA Today bestseller Lorhainne Eckhart is best known for writing Raw Relatable Real Romance where “Morals and family are running themes.” As one fan calls her, she is the “Queen of the family saga.” (aherman) writing “the ups and downs of what goes on within a family but also with some suspense, angst and of course a bit of romance thrown in for good measure.” Follow Lorhainne on Bookbub to receive alerts on New Releases and Sales and join her mailing list at LorhainneEckhart.com for her Monday Blog, all book news, giveaways and FREE reads. With over 120 books, audiobooks, and multiple series published and available at all, retailers now translated into six languages. She is a multiple recipient of the Readers’ Favorite Award for Suspense and Romance, and lives in the Pacific Northwest on an island, is the mother of three, her oldest has autism and she is an advocate for never giving up on your dreams.

John Mo has worked for decades as a director, producer, educator and lover of the theatre. He now retreats daily to his studio cave to read audiobooks, commercials, elearning and whatever else tickles his fancy. He loves hiking and fishing in the great outdoors, especially far away from other humans, and much prefers the company of dogs. He has two grown children, a patient and amazing wife, and a terrific mutt named Joey. Find other great audiobooks narrated by John Mo on Audible.

Join us for the #AudioTour