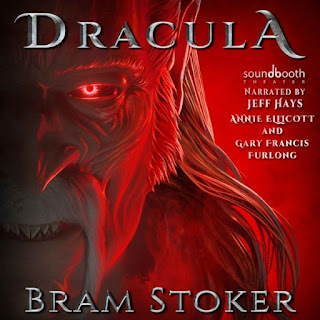 Soundbooth Theater is celebrating the one-year anniversary of the launch of their app!

To honor this occasion, SBT is throwing a stellar anniversary sale.

➜ Details about the anniversary sale:

🎉SOUNDBOOTH THEATER'S BIRTHDAY PARTY WILL TAKE PLACE ON SUNDAY, OCTOBER 31ST AT 8:00 PM ET. IT WILL BE STREAMED ON YOUTUBE, FACEBOOK, AND TWITCH.

When Jonathan Harker visits the castle of the enigmatic Count Dracula at the behest of his employer, he has no idea of the horrors lurking within and poised to spread across Europe. But after narrowly escaping the castle – and the vampires dwelling within – Harker knows what true evil looks like. Now, with the help of everyone’s favorite polymath turned vampire hunter, Abraham Van Helsing, and a small band of dedicated do-gooders, Harker must find a way to destroy Dracula and save the world. Soundbooth Theater is proud to release our rendition of one of the most popular tales in western literature. Jeff Hays, Annie Ellicott, and Gary Francis Furlong effortlessly breathe life into this 123-year-old text. No matter how familiar you are with Dracula, we guarantee this Audio Deep Dive will send shivers down your spine. WARNING: Our script is a faithful adaptation of a century-old story. As such, some language and themes depicted reflect outdated attitudes that in no way reflect the views of Soundbooth Theater.

Founded by prolific narrator and producer, Jeff Hays, Soundbooth Theater is a full-service audio production company that specializes in multicast audiobooks and Audio Deep Dives, which are enhanced with sound effects and music.