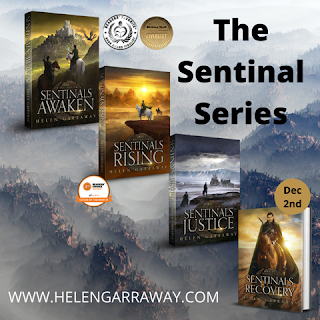 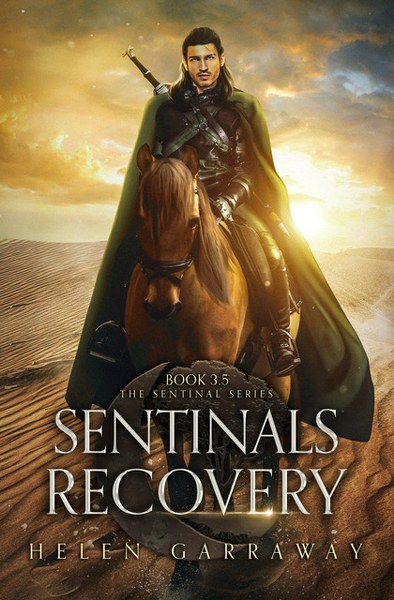 Sentinals Recovery is a novella set in the world of Remargaren. It occurs immediately after the battle at Oprimere. Although this is a complete story, the reader would benefit from reading the first three books in the series.

Birlerion is recovering from the near fatal injuries he received in his second, epic battle with the Ascendants. He returns home to Greenswatch, the Watch that adopted him, to recuperate and finally meet his Darian stallion, Kin’arol, who has been waiting, somewhat impatiently, to bond with him.

Only Kin’arol is not there. Someone has stolen him. For such a distinctive horse, he has vanished into thin air.
Though not fully recovered, and still hampered by his injuries, Birlerion sets off, accompanied by his brother Versillion, to recover his horse. Not even Assassins, belligerent Terolians or the harsh Terolian desert will stop him from bonding with Kin’arol, though his failing body might. 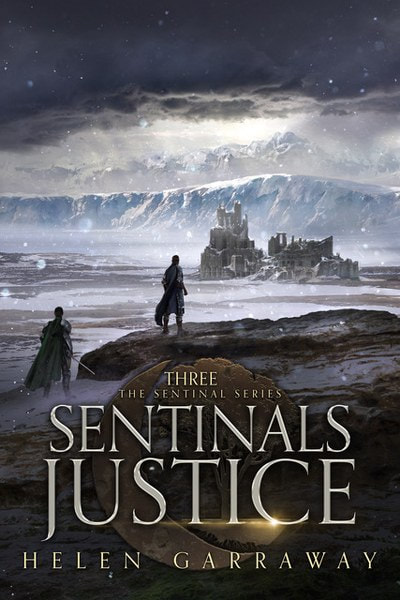 Sentinals Justice is the third book in the saga of Remargaren, a vibrant, ancient world of high fantasy suffused with magic and adventure.

The third installment of the Sentinal series takes us to the frozen north, to the Grand Duchy of Elothia. Border tensions with Elothia force King Benedict to send a diplomatic envoy to sue for peace. Benedict has his hands full with Vespiri and Terolia, he can't afford a war on his northern border as well. Commander Jerrol Haven is sent to broker peace. Having met Grand Duke Randolf the thirteenth before, Jerrol hopes their previously successful negotiations will assist in a speedy resolution and allow him time to discover how to rescue Birlerion from the Ascendants.

Meanwhile, the Chapterhouse has received a request for a scholar to assist in searching for signs of the Sentinals in Elothia. Taelia is assigned the task, because Scholar Torsion is also missing after the attack at the Watch Towers.

Amidst escalating tensions and conflicting needs, Jerrol journeys to Elothia, hoping to meet with Randolf before the Ascendants can influence him. Escorting Taelia is an unexpected bonus. Can Jerrol stop Elothia and Vespiri from going to war? Will they find more Sentinals? And can they find out where the Ascendants took Birlerion and Torsion before it is too late.

Sentinals Justice concludes the opening trilogy...though the adventure will continue! 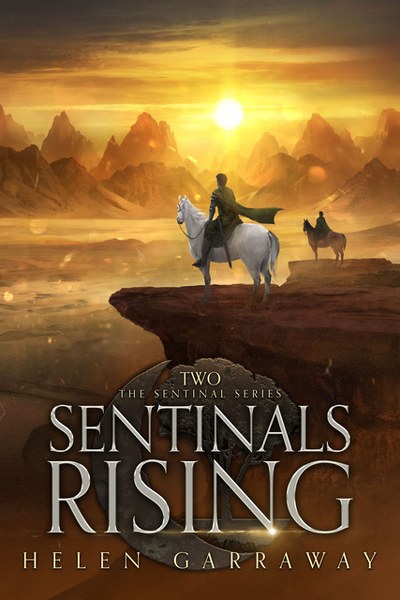 Sentinals Rising is the second book in the saga of Remargaren, a vibrant, ancient world of high fantasy suffused with magic and adventure. Jerrol Haven, having rescued the king from the clutches of the malevolent Ascendants, knows they haven’t stopped their scheming. While trying to learn more about the mysterious Sentinals he woke from a three-thousand-year sleep, he has to defend his king and country from further magical attacks. Should he trust the Sentinals in such vital positions? Can he trust them to protect the king and Vespiri? As Jerrol learns more of their capabilities, he realises there are more secrets yet to be revealed. Maybe those questioning their sudden rise in power have a point. Before he can delve further, a call for help comes from the neighbouring country of Terolia. The nomadic Families are disintegrating into chaotic infighting. The king sends Jerrol to investigate, instructing him to do whatever is needed to protect the Families from the Ascendants. 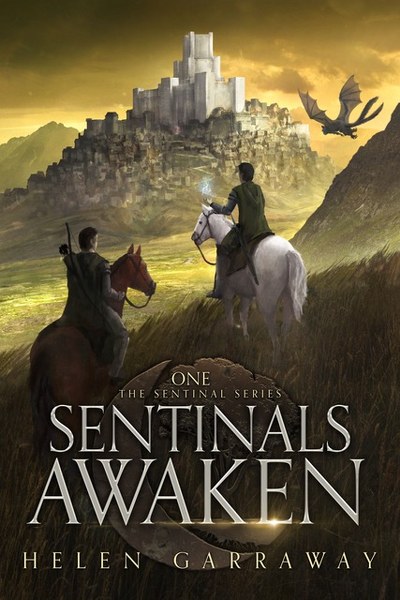 Sentinals Awaken is the first book in the saga of Remargaren, a vibrant, ancient world of high fantasy suffused with magic and adventure.

As a three thousand-year-old threat reemerges, only one man has the power to awaken the world’s greatest protectors and restore order to the realm. He just doesn’t know it yet. When Jerrol Haven, a captain in the King’s Rangers, discovers treason at the highest level, he knows immediately that the knowledge puts his life at risk. And indeed, though he expected the ailing King to shield him, the ambitious Crown Prince sentences Jerrol to death.

What hold does the Prince have over his weakened father, and who or what is he protecting?

Now, with signs that her veil is weakening and the Ascendants are creeping back into power, she has returned and is in dire need of Jerrol’s help. For though he doesn’t know it, Jerrol possesses a rare gift: By chance, he touches a revered Sentinal tree and awakens Birlerion, one of the Lady’s personal guard who have been sleeping in the strange, tall trees since they were last called to battle. Aided by Birlerion, Jerrol flees and begins his journey to help Lady Leyandrii save Remargaren once more.

But time is running out: As it was with the King, the old guard Lords are everywhere being usurped, attacked, and assassinated. Jerrol must unravel the mystery of the Ascendants’ return, stop the sinister force that is dividing good families through bloodshed and betrayal, and rescue the King—and his troubles are only just beginning.

Ideal for lovers of The Witcher, Tad William's Shadowmarch or the Belgarion series.

Exerpt from Sentinals Recovery by Helen Garraway
Kayerille took them to a local bar, introduced them to the owner, and sat back as Birlerion proceeded to befriend everyone and drink them all under the table. By the end of the night, only Birlerion was still standing, singing the Lady’s hymn under his breath. Versillion found him staring up at the moon, hugging a wine bottle.
“Birlerion?”
Birlerion lurched round and peered at his brother. “Versssilll?”
Versillion grabbed Birlerion’s arm and forced him into a chair. Looking around, he saw Landis and Kayerille slumped against each other over a table. “What have you done?”
“We’re sssellerbrating.”
Versillion went to find the owner and ordered plenty of black coffee. He forced Birlerion to take a mug as he tried to wake Oscar up. “Oscar, drink the coffee. You can’t let your men see you like this, nor the elders; not on your first night.”
Oscar groaned but took the mug. “My head,” he said, looking around blearily. “Where are we?”
“In a bar, you fool. What were you thinking?”
“Birlerion was happy. We wanted to make the most of it.”
Versillion stared at Birlerion before crouching in front of him. “Birlerion? What is it?”
Birlerion tilted his head and drank his coffee, keeping his silver eyes on his brother. “Why does it have to be anything?”
“You never get drunk.”
“’Bout time I did, then. Can’t go through life never getting drunk.”
Kayerille stirred as Oscar nudged her. He shoved a mug under her nose, and she inhaled and opened her eyes.
“What happened?” Versillion asked.
“Nothing,” replied Birlerion.
“It’s not nothing.”
“Versillion.” Birlerion sighed. “Leave it.”
“What did Leyandrii say?”
Kayerille looked up, her eyes widening.
“She said goodbye.” Birlerion’s eyes shone with unshed tears.
Versillion gripped his shoulder. “You fool. It’s not forever. She will return.”
Birlerion’s lips twisted. “You think? She said goodbye, Versillion,” he whispered. “She said she could no longer cross the Veil, and she was leaving Remargaren in our hands. Mine, Jerrol’s and Marguerite’s. She left me her blessing.”
Exhaling, Versillion hugged him. No wonder Birlerion had been drinking. Exulting in the Lady’s blessing whilst grieving for her and his lost friends. Such a contradiction of emotions would make anyone resort to drink. “Come on. Let’s get you all back to the barracks. You’ll be glad to know you have a bed made up. Whether you’ll be able to get out of it tomorrow is another thing, but you deserve to have a headache.”
Oscar scowled at them. “I’m never going out with you again, Birlerion. I thought you were the sensible one.”
Birlerion’s laugh was hollow. “Not me. Find an impossible task and send for Birlerion. He’ll deal with it. And if he’s lucky, he might be one of the ones to live and tell the tale.” He closed his eyes.
Versillion watched him. “No going to sleep here. Kayerille, get his other arm. Oscar, don’t you dare stagger.”
Versillion herded them back to the garrison. The sentries averted their eyes, though they grinned as their commander overcorrected as he passed through the gates.

Where did you come up with the names in the story?

I had such fun with the names! I even have quite a few stories about how some of the names were chosen. Some came fully developed, and I knew they were right, others took some work.

The world of Remargaren was based on my mum’s name, Margaret, as was Lady Marguerite, and in books yet to come, Margreth.

Arifels, the winged kitten-like creatures, were based on my cat Alfie. I took his name and played around with it.

I was originally going to call the goddess Leylandii, until someone said she sounded like a conifer tree! So although I did try other names, like Adrienne, they didn’t work for me so I went back to my original name and played around with it, until I came up with Leyandrii.

Another name I changed was one of the Ascendants, I originally had him pegged as Ter’actor. My alpha reader has kids, and he said it sounded like a tractor or a dinosaur, so back to the naming pot I went, thank goodness he was a family man, my daughter being long grown up!

I could keep going, if there is name you want to know more about, let me know in the comments and we’ll see if there was a story behind it!

How did you come up with the title of the book?

When I first started writing the Sentinals series, I was searching for a name that would mean guardian or protector. I came across the word sentinel. But to me, I associated that more with computers, software or even science fiction. And my books are hard core medieval epic fantasy, so the word didn’t work, and yet it resonated with me.

And then I thought, why not change the ‘e’ to ‘a’, and make Sentinal. It would be near enough to the original word that the guardianship meaning would translate, but be different enough to suggest something mysterious or unusual about it.

And so became the Sentinals and their sentinal trees. The Sentinals were the Lady’s personal guards, when she banished all magic from the world they couldn’t follow her, and she encased them in the trees to protect them until they could be awoken again. The trees were named sentinal trees in memory of them.

I can’t wait to share the prequel with you, (book 5!! Expected late 2022) which is already written, just needs editing, and where we will find out who these amazing people were and what happened to them.

Want to know when these books release? then follow me on Goodreads or Bookbub for the latest news. Or sign up to my newsletter. 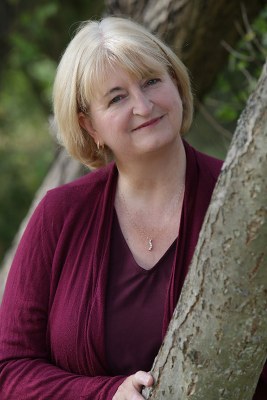 Helen Garraway lives in the leafy royal borough of Berkshire in the UK and has been writing about the world of Remargaren, a fantasy world of her creation, since 2016.

An avid reader of many different fiction genres, a love she inherited from her mother, Helen writes high fantasy stories where she creates her own worlds and populates it with amazing characters and adventures. When she has time, she also enjoys paper crafting and scrapbooking as an escape from the pressure of working as a Product Manager.

Having graduated from the University of Southampton with a Degree in Politics and International Relations, she remains an active member of their alumni.

Having ventured into the world of self-publishing, Helen has now published three books with a fourth scheduled to release in December 2021.

Sentinals Awaken, released October 2020, was Helen's debut novel, which was followed by Sentinals Rising in March 2021 and Sentinals Justice in released September 2021.

Sign up to Helen’s Author newsletter and download a free novella set in the World of Remargaren, Sentinals Stirring, set about seven years prior to Sentinals Awakens. Sign up via www.helengarraway.com