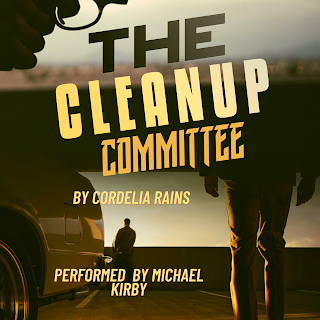 It's 1978. The drug trade is booming, and law enforcement can't keep up. Enter the Cleanup Committee. They've all lost children to drugs. They're rich, they're organized, and they have resources. Will they succeed where the law failed?

Cordelia Rains lives and works from home in the beautiful pacific northwest. Her debut crime novel, The Cleanup Committee, was inspired by her parents: a police dispatcher and a nurse. A children's series is also in the works. Cordelia enjoys coffee, movies, and rock music. She can often be found walking with her family and their Saint Bernard.

Michael Kirby is a classically trained actor who has performed in film, television, theatre, and voiceovers for more than twenty-five years. He has developed a style that envelopes the audience in the narrative, bringing to life the writer's work from the page. With clarity, grace, and a deep range of vocal techniques and characters to draw from, he puts the listener right in the heart of the story. He is a California native a lifelong skateboarder, outdoorsman and sci-fi nerd who spent a number of years living and working in New York City. Michael is a driven performer that brings mindfulness to all of his projects. As a father of two toddlers, he also approaches all things with a patient and nurturing spirit. Michael loves his craft and thrives on storytelling, both fiction and non-fiction.

Join us on the #AudioBook Tour with Guest Post