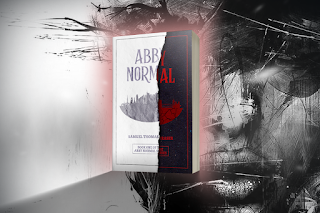 Abby Henderson has lived her whole life under a dark cloud. When she was born, a demon called the Deacon claimed her family as his property. When she turned 13, she was traumatized by an ominous psychic vision. When she turned 14, her dad had a psychotic breakdown and tried to kill her.

She’s just turned 25, and now people are dying all around her.

This is all according to the Deacon’s plan. He believes that Abby is the key to a ritual that will unleash an ancient evil on the world, and he will stop at nothing to make sure that ritual succeeds.

Now, Abby is in the fight of her life against an enemy that defies all reason. Together with her pious girlfriend, her magic-slinging ex-teacher, and a hotheaded Amazon with a machete, Abby will have to use every trick in the book to outlast the Deacon. Because if she can’t, her next birthday is going to be Hell.

What made you want to be a writer?

When I was 19, I was diagnosed with autism spectrum disorder. That’s a very broad term for a whole host of developmental disorders from low-functioning autism to Asperger’s syndrome (which is what I have). Day-to-day, having Asperger’s isn’t as much of a hindrance for me as it is for some people, but social interaction can be very difficult sometimes.

In conversation, I often fixate on one topic for too long, and if it’s a topic I’m passionate about, I’ll just start monologuing and I won’t stop. On the other hand, if I don’t have as much interest in a topic, I may not say anything for ages, because I’ll feel like I have nothing I can sensibly contribute. If I do try to contribute, I’ll trip over my words and ramble while my brain screams at me that I’m not making sense and the best time to shut up was about fifteen seconds ago. Sometimes I can be too blunt, and because I can’t pick up on nonverbal cues, I won’t realize it if I offend someone until they tell me they’re offended.

This is a long way of saying that writing gives me a sense of control. When I can dictate both sides of a conversation and steer it toward a conclusion of my choosing, I feel so much more relaxed than if I have to go to a job interview or (heaven forbid) on a date. As a kid, I was always making up stories and losing myself in imaginary worlds even at times when I really shouldn’t have been. I played soccer for a bit when I was about eight or nine, but when I was on the field, I always spent more time fighting imaginary pirates or secret agents than I did chasing the ball and paying attention to the game. When I reflect on that time now, I realize that I was always trying to escape into a world that was more predictable than my own. There’s a 50% shot at victory in a soccer game, but in a battle with imaginary pirates, I would always win. I write because it gives me a clear goal to work toward, and I always know how the beginning and the middle will beget the end. That’s the same reason I enjoy acting and building LEGO sets: I always know from the first page what will happen on the last page. As for real life? Yeah, not so much.

What made you want to write this book?

Abby Normal is what happens when you take a nerdy theatre kid, stick an English degree in his hands, and pump his brain full of Beowulf, Buffy the Vampire Slayer, and HP Lovecraft. As a result of my education and my general geekery, I have a very wide range of literary and cultural interests that don’t always jibe with one another. The writing of Abby Normal was a process of taking all those interests and stuffing them into one box, then trying to craft a narrative that would at least make them all look like they belonged together. In this book, the astute reader may find bits and pieces of Buffy, The Dresden Files, Doctor Who, BioShock Infinite, Alice in Wonderland, Alan Wake, and much more besides. Ultimately, I wanted to write a story that would entertain me, and if that meant ripping off (or as we say in the business, “paying homage to”) other stories that have entertained me over the years, that was a price I was willing to pay.

Samuel Thomas Fraser is a writer and actor from the rainy mountains of Vancouver, BC, Canada. A lover of medieval literature and truly weird fiction, Sam holds a BA in English and a Certificate in Creative Writing from Simon Fraser University. His short fiction and poetry has appeared in outlets including The Macabre Museum and Unleashed: Monsters Vs. Zombies Vol. 1. As a performer, he has inhabited such memorable stage roles as Algernon Moncrieff in The Importance of Being Earnest and Charlie Cowell in The Music Man. Abby Normal is his first novel.