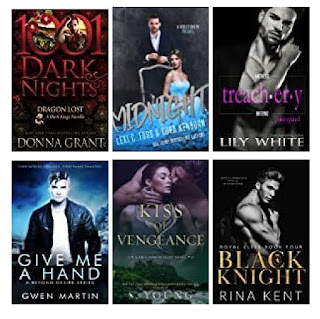 Destinies can’t be ignored. No one knows that better than Annita. For as long as she can remember, it's been foretold she would find a dragon. A real-life dragon. She’s beginning to think it was all some kind of mistake until she’s swimming in one of the many caves around the island and discovers none other than a dragon. There is no fear as she approaches, utterly transfixed at the sight of the creature. Then he shifts into the shape of a thoroughly gorgeous man who spears her with bright blue eyes. In that instant, she knows her destiny has arrived. And the dragon holds the key to everything.
My Thoughts 💭:
Another fantastic addition to the Dark Nights collection!
Donna Grant was a new author for me when I started this novella, which in IMO, is the idea behind the Dark Nights collection.
As readers, we get a chance to dip our toes into a new author's universe.
Meet some of their characters.
Get a taste for his/her writing style.
All in a complete short/novella length story that promises to entertain and delight.
Annita was such an easy heroine to like. She just rolled with the adventures as they were happening. She lived by the belief that you can either embrace the unknown and see where the journey takes you. or you can duck and cover ... but then you will always be asking "what if?"
Royden was a more subtle soul. Years of loss and "what if's?" had left him a bit wary and skeptical. But Annita called to him on an almost primal level.
He couldn't walk away.
He didn't want to walk away.
This is a life mate story so the chemistry is there from the moment our couple meets.
A sweet romance where the past and present collide.
I acquired the first book in the series as soon as I closed the pages on Annita and Royden.
#paranormal #romance #1001darkknights #donnagrant
Amazon  Apple  Kobo  Nook  Google

Midnight: A Violet Queen Prequel by Lexi C. Foss
Description:A Cinderella Tale Spun in a New York City RealityLucynda EllisI’m not an actress, but I’ll play the part if it means saving my stepsister’s career. Put on the dress and the strappy shoes, wear a smile, and pretend to love the prince. Easy.Until the prince ends up being sin dressed in a suit.Kellen Knight unravels my world with a kiss that lights my soul on fire. It’s all meant for show, a televised embrace tucked away between the sheets, yet I can’t stop thinking about him or his hypnotic mouth.When I leave my precious sketchbook behind at the shoot, I’m left with no choice but to track him down to get it back. Except this prince lives in an untouchable, glass-coated tower and all he knows me by is a single name—Cyn.Kellen Knight
My Thoughts 💭:
😍This couple - Loved them!😍
Do not pass this up!!
A funny refreshing read that tantalizes all the senses
I want more!!
This couple from the moment they make contact exploded from the pages
Kellen and Cyn are absolutely perfect together
Kellen is ... IDK, He exudes arrogance and entitlement but if you look - really look -
Past the headlines, the expensive suits, the cage around his heart You will see the trickster, the charmer
The uninhibited boy who enjoys laughing and friendships
The man who has grown weary of the sharks that circle him
Cyn was just stubborn. One of the things I always enjoyed about the Cinderella fable was the fairy godmother and the little helpers. The friends you don't realize you have until you are truly in need. Don't fret they are abundant in this tale. Actually, they come from the least likely of places.
I also enjoy Cyn's easy sense of faith and understanding -Even after everything she has endured she still refuses to taint her own soul with hatred and loathing.
This is one of those times when you do not associate kindness with weakness.
There were a couple scenes that left me scratching my head but it is a fairy tale so...
Enough rambling - If you want to curl up with a tale that will leave you with a refreshed hope for humanity (go on smirk it's okay) and leads to bigger and better things - YES this is just the intro to a new series - then grab this anthology and get to laughing, loving and living (vicariously)
#newadult #contemporary #fairytale #romance #lexicfoss #kindleunlimited
Amazon

Treachery Prequel by Lily White
Description:Ninth Circle.
Treachery.
Also known as Tanner Caine.
He is a temptation with cold, dark eyes.
A man with a seductive smirk and a body built for pure sin.
The linchpin of a group of wealthy bad boys known as the Inferno.
A dark presence that repels as much as he attracts, Tanner is the poisoned apple I want to bite even when I know it will destroy me. Our story started in college, but I ran from him so far I believed I was safe.

My Thoughts 💭:
A fiery (yes, I went there) introduction to Inferno
Luca is intelligent she knows the men from Inferno are not a group she wants to associate with - But her best, and almost only, friend is dating one of them. Isn't peer pressure and/or the need to feel a part of something what causes many a good lass/lad to falter?
Luca can give as good as she gets and that is what made this hunt such a spectacular read for me!
She is feisty, true to herself and she stayed that way!!
The girl can play a mean game of tag.
Tanner arrogantly thought it would be easy to catch this little mouse and toss her into the maze that is his world.
So wrong!
This sets up a small bit of background -
Introduces us to some, not all, of the cast-
We also get just enough of the plotline to tease our hunger but nowhere near enough to sate it
I can not wait for the release of this series!
#newadult #romance #lilywhite #kindleunlimited
Amazon

Give Me A Hand by Gwen Martin
Description: Cam's life had been predictable. He knew what he wanted.
Until that impromptu mutual orgasm with Jude.
Cam didn't want a boyfriend, and he certainly didn't *need* a relationship.
But he knew one thing he did crave and that was more of Jude Ellison.
Will Cam be able to work through his painful past if Jude offered him a chance at more?
My Thoughts 💭:
This touched on so many different emotions
The story is told from Cam's view.
Cam has a strong personality but he is wary about exposing his heart first and I got that. Young, already burned once, and so desperate to want it to be real - but the fear of grasping it and finding out it's just an illusion? Enough to keep his guard up.
He and Jude are close and what they share is practically perfect - why label it? Sometimes it's easier to pretend. You don't lose a friendship and no one gets hurt.
Cam slowly finds his footing - after removing the said foot from mouth.
Jude... I adore his balls to the wall attitude. Yeah, he sidestepped a bit but he still grabbed what he wanted. He saw past the illusion and was willing to put himself out there.
I wish we were given a bit more Jude. His character called to me.
The relationship between them is an emotional slow build -
They dance around the truth for a bit. A small prod there a little poke a jump back.
There was something magical about their exploration of each other - both in the emotional and physical sense
I felt some of the "problems" were a bit easily solved but then again Cam was the type to just steamroll past the obvious. I do not mean that in a mean way he was just a bit clueless at times.
#MM #gayromance #contemporary #newadult #kindleunlimited #friendshipfiction #gwenmartin
Amazon

Kiss of Vengeance by S. Young
Description: A standalone paranormal romance from New York Times bestselling author Samantha Young, writing as S. Young.
Fionn Mór was once a high king of Ireland; a fierce warrior who led his tribes against the invading fae. It was a war he couldn’t win and to save his family he turned consort for the Fae Queen. Fionn escaped as the thing he once despised, and the people he loved betrayed him for it. Now, centuries later, it’s time to reopen the gates to Faerie to take his revenge against the Faerie Queen.
My Thoughts 💭:
Rose is such a vastly different character than Thea
Where Thea didn't want the power or the immortality that comes from being Fae Rose absolutely lives for it
She embraces the magic that is her new reality with an almost childlike reverence
The easy way she confronts and overcomes each new hurdle at times had me cringing other moments I was laughing
Then we have Fionn - I wanted to toss him from the parapet!!
He could be such an idjiot at times!
So bent on revenge he couldn't see past its cloying darkness to the light that was shining before him.
He only needs one of the children to sacrifice.
Sure he is sorry he will snuff out her light but her sacrifice will be for the greater good.
Right?
There were so many moments in this story where the smooth rhythm lulled me into a calm sense of success and accomplishment - They were going to make it work, everything would be okay - Only to suddenly jar me out of my happy state and toss me into a heart-pounding soul-shattering scene that upended everything I thought I knew
How could she survive so many foes?
Then the ending...
Knowing now what lies ahead -
Who may be the next to fall?
The increasing impossibility to protect?
I'm not sure I can wait.
#paranormal #fantasy #romance #syoung
Amazon  Kobo  Nook   Apple

Black Knight by Rina Kent
Description: Love is impossible. Hate is an open game.
Black Knight is part of Royal Elite Series but could be read on its own. For better understanding of the world, you might want to read the previous books first. This is a high school bully romance, mature new adult, and contains visceral mental health situations that some readers can find triggering.
My Thoughts 💭:
No Spoilers - This 🤗 All the feels
" Instead of dancing alone, dance with others. Instead of living alone, lean on others. Instead of purging the pain, talk about it. "
Xander, I'm so proud of you.
Kimberly let go - someone will catch you - even if you can't see them - let go
😥 this was a ...
Rip out my heart -
stomp on it -
grind your heels into the shattered pieces -
scrape up what is left -
and reshape my world -
Five-star bully romance
#dark #bullyromance #mustread #blackknight #rinakent #kindleunlimited #newadult
Amazon