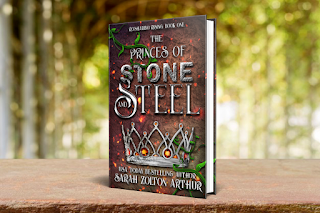 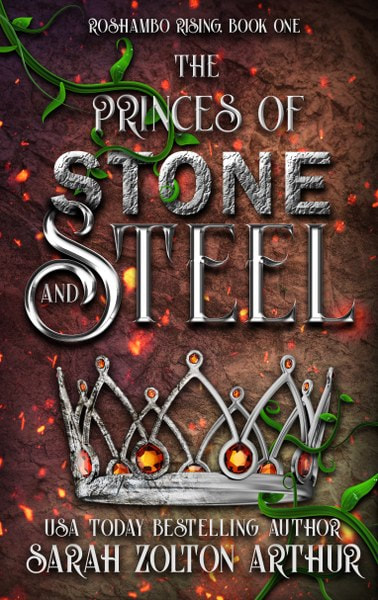 She must remember the past to save the future.

What starts as the abduction of Millie Merchant turns into an awakening of bitter truth. Her life is a lie. Her family a fake. It’s all been part of an elaborate hoax to keep her from her destiny. A destiny that lies in the land of Roshambo.

The lines between fantasy & reality blur as she’s transported to a fantastical realm boarding on extinction. Struggling to make sense of it all, Millie is presented with two princes determined to win her hand. One has her best interest at heart, the other seeks control of the realm. But who can she trust in a world full of strangers?

War is looming. Nightmarish beasts prowl the lands. It falls to Millie to be the salvation of Roshambo. For she alone is the ruler the Outliers have been searching for. The origins of rock, paper, scissors come alive in a tale far more twisted than a simple child’s game.

“Shh…” Mármaro put a finger to his lips.
“What?” she mouthed without actually letting any sound escape her throat.
“We aren’t alone.”
Birch bark ripped like sandpaper against her exposed back as he pressed them both flat against a tree to avoid being seen. Content to wait for his cue, Millicent dug her fingernails deeply into the tree bark, scraping pulp deep under the quick as he set her down.
Rumblings of angry groans rippled out across the forest floor, like a pebble thrown into the center of a lake. The world around her appeared to change. Once vibrant colors dulled to muted tones in response to whatever lurked about around them. Millicent froze as terror gripped her feet, seizing them captive, unable to move forward. “What is that?”
“Stay close.” Mármaro ordered.
She held on, squeezing his hand tightly. They both strived to remain silent, but her heart beat so wildly, it felt impossible to imagine that it wouldn’t betray their position. They crept from tree to tree trying to avoid the loudest ripples.
“Ailuranthrope.” Mármaro barely whispered, almost as a thought not meant to be spoken. Millie squeezed his stone hand so tightly color left her own. He shook his head as if remembering she was with him. “Werecat,” he continued. “But why? They never stray this far south. Even still, they never travel alone.”
The pair started to turn back toward his home when a second monstrous cry echoed from the trees ahead of them. The leaves rustled. The sound of claws clicked along the hardened ground.
A creature emerged slowly from the thick, as if stalking its prey—nose tilted upward to welcome their scent dancing over the wind. As Millicent and Mármaro kept their undivided attention on the creature before them, hot breath tickled the back of Millicent’s neck. A small whimper escaped her. Mármaro whipped his head around to see part of the werecat’s massive frame. It smelled them but hadn’t seen them yet, evident, as they were still alive. But one wrong move would surely prove fatal.
Her chest rose and fell rapidly. They were about to die; she felt it in her soul. That was, until a hole opened up behind her legs. A hole just wide enough for a girl her frame to pass through appeared at the base of the birch. She gasped, startling Mármaro. He looked down and nudged her backward a shuffling step

Korrigan was right. If I played my cards right, I could probably find myself in a lip lock with several men tonight. The question was: Did I want to? I wasn’t exactly in my element here. She sauntered up to the bar in full-on Korrigan mode, swaying her hips seductively, throwing me a wink over her shoulder. Korrigan knew how to work a room.
Me, I stayed close, trying not to make eye contact or any sudden movements.
“Kori. Looking gorgeous as always.” The bartender, one of the highly-tattooed, highly-pierced, leather-and-denim-wearing masses, shot her a sly smile. “What can I get you?”
“Two of my usual,” she answered dryly, looking around everywhere but at him, as if already bored with the conversation.
“Coming right up.” Bartender-man’s tone wasn’t dry, and I got the sense that this was some sort of game the two played on a regular basis. “Who’s your friend there?” He gestured with his chin toward me.
“This is Mils. We work together.”
“Mils.” He smiled that same slick smile my way and handed off my bottle.
“Come on, girl.” She took my hand, leading us straight into the middle of the dancefloor. “Time to have some fun.”
Well, dancing had never been my forte but following Korrigan’s lead, I swayed my hips with my arms lifted in the air. Pretty much whatever move she threw out, I copied. Men pressed up against her backside dancing. Men pressed up against my backside dancing. A different guy than the one currently attempting to grind against me, most likely intoxicated, rather loudly asked my name again.
“Mils,” Kori answered just as loudly right as the music died to start a slow song. When I turned around to see who had asked my name, it didn’t matter once I saw him walking my way. I’d never seen such a stunningly handsome man before in my life. My mouth went dry and my feet forgot how to work. A zing of electric excitement trilled down my spine when we locked eyes. Holy-ever-loving-moly. Did I say my mouth went dry? Because it did and I became momentarily stupid.
Short, spiky blond hair the color of rose gold. Even through the haze of smoke, his eyes shone just short of glistening this startling silver-gray, reminding me of brushed aluminum. Majestically high, slightly rounded cheekbones and straight nose. Tall and toned, his sculpted biceps pushed the boundaries of the black T-shirt fabric’s stretch. In short, he appeared before me, the epitome of my ideal male perfection. Like a dream, he kept walking until we stood face to face, not moving.
“Mils?” he whispered, running a finger lightly up the length of my arm, spiking the tiny hairs along with my blood pressure. I was lucky to get my head to nod. Why he’d be paying me a lick of attention when Korrigan stood mere inches from us dumbfounded me.
“D-Do you have a name?” Great. Stuttering now. My embarrassment quickly waned, though, as a look flashed in his eyes when I asked his name. Disappointment, maybe?
“You can call me ‘Steele.’” Steele. His voice deep and smooth, but almost metallic at the fringes. I had the feeling that maybe I should have known him, possibly a local celebrity.
“Nice to meet you, Steele.”
“Nice to meet you, Mils.” Humorlessly, he laughed at the way he said my name and pulled on the hem of my leather vest until no space remained between us.
On any normal day, I’d have been put off by being laughed at. Today, however, was no normal day, and I found myself too mesmerized by the man to care.
Then, with his hands low on my hips, he swayed us slowly.
The moment might have been calm, but someone forgot to inform my heart because the way I felt it pounding in my chest, it must have thought we were slam dancing. Steele rested his forehead down in the crook of my neck. The whole experience felt glorious until his lips brushed my skin. He trailed his finger up and down my arm as he pressed his lips to the pulse on my neck. I stilled in his arms.
“Mils? What’s wrong?” Those eyes captured me, pulled me into them with the gravitational force of a black hole.
“I’ve never been… That is…” I released a long breath before continuing. “No one has ever kissed me before.”
There. That flash of disappointment in his eyes again.
“Then let me be your first.” Steele brought his mouth up so close to mine, his glorious scent, some mixture of fruity and minty, filled my nose. I closed my eyes as he closed the minute gap, brushing his lips softly at first against mine. His breath hitched. My breath hitched. And then he pressed deeper, not hurried, but like he cared about this kiss. The electric trill spread from my spine to all my extremities—arms and legs and fingers and feet.
When he pulled back, it took me a moment to collect myself. I wanted to scold him for doing so. I wanted him to kiss me and keep on kissing me until neither of us could stand any longer. Or until the bar closed and they kicked us out where we would have to go somewhere else to keep on kissing.
He began to sway our bodies again, and it didn’t matter that the song had switched back to fast, heavy and hard-hitting. Our dance felt intimate, as if he and I alone danced in this room full of people. My reaction to this stranger confused me yet felt as natural as laughing at the same time.
“Will you remember tonight?” He spoke softly into my ear. A curious question.
“Of course, I’ll remember tonight. I don’t think I could ever forget you.”

My favorite author right now is Jennifer L. Armentrout. I love Julie Kawaga and Wendy Higgins, too. Oh, and I have been known to read a Kristen Ashley book or ten. But I’m not a buy it just because that author wrote it type of reader. Sometimes they stray away from things that I enjoy in a book. Isn’t that a great thing about books? That there’s something out there for every taste.

Editing sucks your soul. Publishing is not that fun on our end. It’s all so much work, but the writing… the writing is the fun part. Three o’clock in the morning when most people are sleeping your eyes pop open and that’s when you reach for the trusty notebook and pencil you keep by your bedside to begin scribbling down this story concept or scene that forced you awake. Does that sound familiar to you? If so, then you might just be a writer, too. I can’t tell you how many stories started their life in scribbles that I found hard to decipher the next morning from those notebooks, or hastily written on napkins or even a square of toilet paper. Go ahead and laugh--it’s happened. 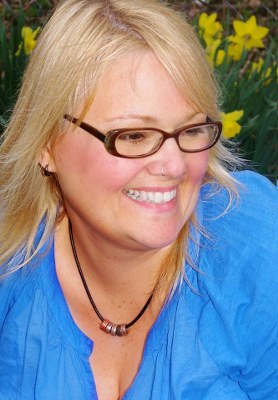 Sarah Zolton Arthur is a USA TODAY Bestselling author of Adult Contemporary Romance, Romantic Suspense, Rom-Com, LBGTQ+, and PNR author who recently decided to dip her toes in the world of YA Fantasy. She spends her days embracing the weirdly wonderful parts of life with her two kooky sons while pretending to be a responsible adult. And there is plenty of the weird and wonderful to go around with her older son being autistic and the younger being a plain ol' wisecracker.

She resides in Michigan, where the winters bring cold, and the summers bring construction. The roads might have potholes, but the beaches are amazing.

Above all else, she lives by these rules. Call them Sarah's life edicts: In Sarah's world all books have kissing and end in some form of HEA. Because really, what more do you need in life?

$25 Amazon Giftcard, a Princes of Stone and Steel notebook and a premium 22oz. insulated water bottle with logo