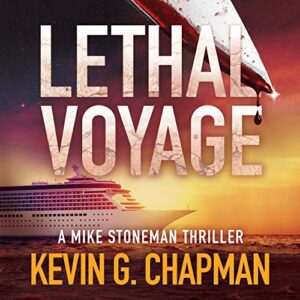 A dead body can ruin a vacation...It was a suicide, wasn’t it? Maybe the on-board production of Chicago isn’t the only place people are getting murdered! NYPD homicide detective Mike Stoneman and medical examiner Michelle McNeill just want a relaxing cruise. But, Michelle is convinced that there is foul play at work in the death of a Broadway talent agent’s wife. The ship’s head of security wants to keep it quiet. But, how many bodies can he cover up during one sailing? When it looks like Michelle might be the next victim, Mike needs to find the killer and keep Michelle alive for the end of this lethal voyage. Don’t miss the next installment in the Mike Stoneman Thriller series!

Kevin G. Chapman is, by profession, an attorney specializing in labor and employment law. He is the most recent past Chair of the Labor & Employment Law Network of the Association of Corporate Counsel, leading a group of 6800 in-house employment lawyers. Kevin is a frequent speaker at Continuing Legal Education seminars and enjoys teaching management training courses. Kevin’s passion (aside from playing tournament poker) is writing fiction. Kevin’s first Novel: "Identity Crisis: A Rick LaBlonde, P.I. Mystery," was self-published through Xlibris in 2003, and is now available via Amazon.com as a Kindle e-book. His second novel, A Legacy of One, published in 2016 and was a finalist (short list) for the Chanticleer Book Reviews' Somerset Award for Literary Fiction. A Legacy of One is a serious book, filled with political and social commentary and a plot involving personal identity, self-determination, and the struggle to make the right life decisions. Kevin’s next novel, Righteous Assassin (A Mike Stoneman Thriller), was a much more "fun" read -- it's a page-turner. It has some serious sub-themes, but it's a serial killer chase and it's intended to be enjoyable and easy to read. It was named one of the top 20 Mystery/Thrillers of 2019 by the Kindle Book Review! Kevin has just recently finished book #2 in the Mike Stoneman Thriller series, Deadly Enterprise, which was published on December 2, 2019. He has recently completed the narration of books 1 and 2 in the Mike Stoneman Thriller series for audiobook release in 2020. Kevin has also written several short stories, including "Fool Me Twice," the winner of the New Jersey Corporate Counsel Association's 2010 Legal Fiction Writing Competition, which was the genesis of the character Mike Stoneman, the protagonist in Righteous Assassin. He has also written one complete screenplay (unproduced so far) and has another screenplay and two more novels currently in the works, one of which is a sci-fi space opera epic. Kevin is a resident of West Windsor, New Jersey and is a a graduate of Columbia College (‘83), where he was a classmate of Barack Obama, and Boston University School of Law (magna cum laude ’86). Readers can contact Kevin via his website at www.KevinGChapman.com.

A year ago, I was trying to talk up the first two books in my crime-thriller series to some colleagues at a conference. One person asked a question that I had heard frequently: “Is it available as an audiobook?” (OK, the question was really “Is it available on Audible,” but I’m trying to be more inclusive here.) I had to give the answer I had been giving ever since the question was first asked of me after the publication of Righteous Assassin, the first book in the Mike Stoneman Thriller series. I said, “No, not yet.” I said “yet” because I kept telling myself that it could happen someday. But, the up-front cost of hiring a narrator, booking studio time, and hiring a professional engineer/editor was beyond my budget. So, I asked my wonderful wife, Sharon, to buy me a home recording studio kit for the holidays (under $250). In early December of 2019, I set up a studio in my basement (following the advice from all the blogs and You-tube video tutorials I could find) to start narrating my own books. I made a ton of mistakes narrating Righteous Assassin. The biggest was that I didn’t change the settings on my audio capture software to set the microphone input to my newly purchased professional microphone. Instead, I recorded the whole book with the software set on the default microphone – the one built-in to my laptop computer. Ugh. By the time I realized the error, it was way too late. I did much better when recording Deadly Enterprise, book #2 in the Mike Stoneman series. The audio quality was much better, and by book #2, I had developed a pretty consistent voicing for all the main characters. I finished the narration for books 1 & 2 by January of 2020, and the books were available in audiobook format by April. For book #3, Lethal Voyage, I wanted the audiobook version to be available on launch day – at the same time as the Kindle edition and the paperback. So, when I finished the writing and editing in July of 2020, I immediately set up my basement studio and narrated the audiobook. It was much easier the third time, and I had a ton of fun working out the new voices and reading all the chapters of the new book. It’s absolutely true that things get easier with practice. I’m hoping that my listeners appreciate that the production and editing quality on Lethal Voyage are the best of the three books. I’ll be trying to do even better the next time, when I start narrating Fatal Infraction.

Join us for the Audio Tour with Guest Post & Interview