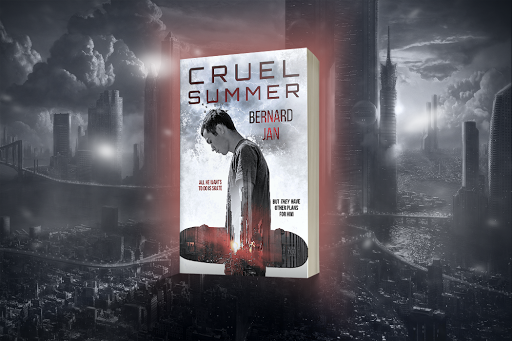 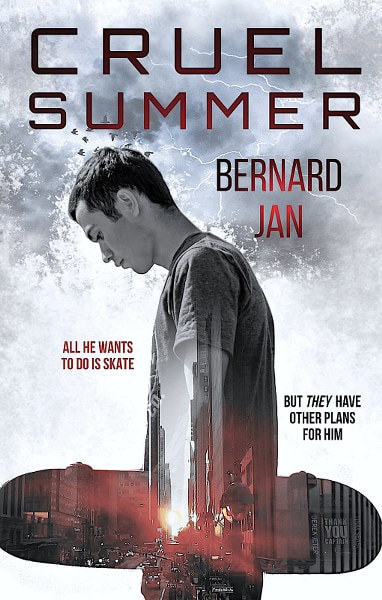 All he wants to do is skate. But they have other plans for him.
Michael Daniels is seventeen and dreams to enter professional skateboarding contests. But beneath New Manhattan, a city under the oppressive shadow of climate change, exists another world altogether—secret laboratories which threaten society as he knows it.
Those with power will get what they want. No price is too high, even if it means making someone special or robbing them of their dignity, freedom . . . or life.
The price is too high for Michael, though. He has endured his stepfather’s abuse and mind games for almost as long as he remembers. Until one day he takes matters into his own hands, ruining the lives of those he loves most. And his skateboarding friends, Alien and Victor, are his only hope for freedom.
When there is no hope left, friendship is what remains.
Order your copy of this gripping, unexpected, strong, and emotional, Young Adult cross-genre novel by Bernard Jan, the author of January River, Look for Me Under the Rainbow, and A World Without Color.
Goodreads * Amazon
**Help the author with your vote for Cruel Summer in
TCK Publishing Reader’s Choice Awards 2021 contest.!**
To cast your vote please use the arrows to navigate to the page 12/16 YA and Middle Grade book category.
When you are there, scroll down to Cruel Summer by Bernard Jan and click on the book. And that should be it!
https://www.tckpublishing.com/2021-readers-choice-voting-page/.

What kind of world ruler would you be?
I would be a horrible world ruler because I wouldn’t know how to rule the world. I don’t like authority and I value freedom above everything. It would be chaotic, because I would let everyone live the lives that would make them happy and chase their dreams. And there are too many bad people who would use that to their advantage and exploit others. Just like it is happening now. They exploit, control and manipulate other people, animals, our planet. We are living in the world of lies that rushes into dystopia. I want something different for everyone. But I don’t know if people are ready for the world where everything is almost perfect. There will always be people who will undermine such efforts for their personal gain.
What are you passionate about these days?
I am always passionate about good books and movies. These days in particular I’m passionate about freedom. We all miss that sense of freedom we took for granted before. And yes, I am also passionate about water and its calming effect it has on me. I wish I could take a swim now!
What do you do to unwind and relax?
Some people meditate to unwind and relax, but I can’t do that. My brain is like a mad train always running somewhere, so I prefer talking to my closest friends instead. Apart from the talk, I like to read to relax. Books are magical, and a good book might be the best thing to relax. Taking a walk, window shopping, listening to music is also a good way to unwind and relax, as well as escaping to the seaside or other natural setting. But that happens on a very rare occasion.
How to find time to write as a parent?
I wouldn’t know that because I am not a parent. But I guess it would be a heck of a task! Because books are also our children and need our full attention.
Describe yourself in 5 words or less!
Emotional. Loyal. Dreamer. Rebel. Protector.
When did you first consider yourself a writer?
I’m not sure I know the answer to that question. Probably in elementary school, I first considered myself a writer because I enjoyed reading books and writing reports about the books I read. But as a kid, I also wanted to be and try many other things, so writing might have been just a fleeting idea. My serious writing came later out of a need to do something at a certain point in my life and leave it as my legacy. To me, writing is telling a story honestly and passionately to affect readers on a deeper level than just entertain them for a few hours or days.
Do you have a favorite movie?
I always like to answer such questions in plural because I have a favorite something in different periods of my life. I have more than a few favorite movies, but I will mention here Gone with the Wind, Hair, Titanic, Brokeback Mountain, The Star Wars Trilogy.
Which of your novels can you imagine made into a movie?
January River and Cruel Summer! I was watching a movie in my head when I was writing these books and I would love to see them made into a movie one day. They give you a cinematic experience while you read them, and I am thrilled that some of my readers recognized that and mentioned it in their reviews. I can also imagine my novella Look for Me Under the Rainbow made into a movie, but maybe as an animated movie because of its topic.
As a writer, what would you choose as your mascot/avatar/spirit animal?
I took an online quiz so I could answer your question, lol. The result came as a surprise to me because I am a cat person and I like wolves. My result was: a bear! I would never think of a bear. But let’s be realistic. It was just a quiz, and some questions didn’t offer the answers I needed (like my favorite color) and in others I could choose without hesitation three options instead of one. So let’s take it with some reservation. 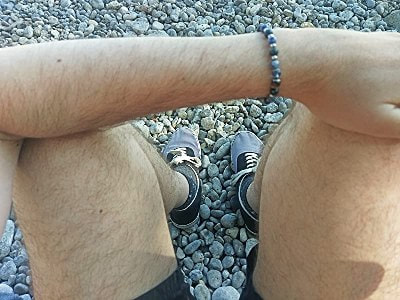 "There is no greater joy than to share what you love with those who appreciate it."--Bernard Jan
My pen name is Bernard Jan. I am an award-winning novelist and a poet from Croatia, and I have released four books in English. I am Readers' Favorite Gold Medalist 2020 and Readers' Favorite Bronze Medalist 2019.
"A World Without Color" is a true story of the last three days I spent with my cat, while "Look for Me Under the Rainbow" in a unique and gentle way sheds light on the plight of harp seal pups in Canada. It warms the heart of all readers concerned about our planet and its treasures. "January River" is a heartwarming cross-genre novel about five friends, one dog, and one river carrying a secret. "Cruel Summer" is a gripping young adult cross-genre novel about an abused teenager from New Manhattan who only wants to skate, but they have other plans for him.
My first two books were written at the beginning of the war in Croatia in 1991 amidst air alerts and illusory attempts when I wanted to believe and think that life is normal, that everything is all right with the world. I have published five novels, two novellas, and one book of poems in Croatian. Four of my books, including the book of poems, were translated into English.
My passion for music and entertainment resulted in my becoming a partner of Tom's Music Place, which was established in 2009 by my friend Thomas Carley Jr., whose objective was to raise the respect of music.
My desire to help others came to the fore during my years advocating environmental protection and advocacy of animal rights. I did volunteering work for the refugees, because suffering does not know any borders. When it comes within your reach in your home, you simply have to do something. As part of my animal advocacy activities, it has been a great honor and pleasure to translate "Eternal Treblinka: Our Treatment of Animals and the Holocaust" by Charles Patterson into Croatian.
Website * Twitter * Bookbub * Amazon * Goodreads