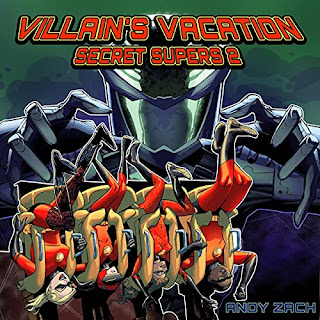 Four disabled seventh graders with superpowers take a vacation at Coaster World. They need a break from fighting criminals. Ever since the beginning of the school year when they acquired their unusual abilities, they've been training and using those powers to fight crime in their town. Little do they know, the arch villain they recently defeated also loves coasters and is vacationing at Coaster World. Worse, the villain wants revenge. Nothing less than turning these teens to a life of crime will satisfy. Can Jeremy, Dan, Kayla, and Aubrey withstand the villain's attacks? Or will they become Super Villains? You can only find out by listening to Villain's Vacation.

Andy Zach was born Anastasius Zacharias, in Greece. His parents were both zombies. Growing up, he loved animals of all kinds. After moving to the United States as a child, in high school, he won a science fair by bringing toads back from suspended animation. Before turning to fiction, Andy published his Ph.D. thesis "Methods of Revivification for Various Species of the Kingdom Animalia" in the prestigious JAPM, Journal of Paranormal Medicine. Andy, in addition to being the foremost expert on paranormal animals, enjoys breeding phoenixes. He lives in Illinois with his five phoenixes. With his first book, "Zombie Turkeys" Andy blazed new ground in paranormal humor. The second book in his Life After Life Chronicles, "My Undead Mother-in-law" expands the zombie plague from turkeys to humans, with hilarious results. You can find both volumes on Amazon Kindle, Createspace print, and Audible audiobook editions. Not content to keep in zombies earthbound, Andy puts them afloat in his third book, "Paranormal Privateers". Just when you thought every funny zombie trope had been explored, new humorous horizons open up. You can get "Paranormal Privateers" in Kindle and print formats. The audiobook is available now on Audible. Having conquered paranormal animal humor in his first series, Andy Zach launches into middle school superhero genre with Secret Supers. Four disabled seventh graders all get superpowers. Who knew a disability could be so useful for hiding a superpower? But the four friends, Jeremy, Dan, Kayla, and Aubrey confront problems that can't be solved by superpowers.

Michael Stafford received his Bachelor’s of Fine Arts in 2017 from ACU. He has been performing professionally since 2013. He has performed in regional and educational theaters across Texas for over a decade. In addition to his voiceover and narration work, Michael teaches Theatre and Technical Theatre in Amarillo. Michael would like to thank Andy for being flexible and so great to work with. Michael would also like to thank his wife and daughter for their continuous love and support.