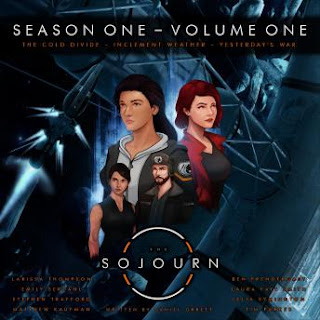 The Tantalus Cluster is the fragile cradle of humanity. Adrift in the divide between galaxies and surrounded by the vast emptiness of the intergalactic void, the Tantalus Cluster is the only home humanity has ever known. Desperate and facing starvation, humanity’s only hope is a strange nebula that has suddenly appeared beyond the edge of the cluster. It’s shifting clouds may hide a source of salvation for the people of Tantalus, but time is running out. Signing on to the ambitious Avalon Expedition, Privateer Captain Cassandra Farren will face the shadows of both the past and future as she leads her small crew into the unknown in a last, desperate bid for the survival of the human race. Directed and produced with careful scientific consultation, The Sojourn captures every detail of life aboard ship, from the sounds of the smallest airlock seal to the largest space battle. Featuring a full cast of veteran voice actors, backed up by high-quality sound effects and an epic original soundtrack, The Sojourn is a unique and striking audio experience. Starring Larissa Thompson as Captain Cassandra Farren, Emily Serdahl as Director Elizabeth Ancelet, Laura Faye Smith as Tamara Melari, Ben Prendergast as Mathias Croft, Stephen Trafford as Inquisitor Castian Vadric, also featuring Matthew Kaufman as Lieutenant Jasper Ravi, and Lelia Symington as Empress Valendra the Sixth. Written by Daniel Orrett, sound design and audio editing by Kennedy Phillips, music by Sam Redfern.

Daniel enrolled in Bangor University, North Wales in their film program, but quickly found that his work on his YouTube channel ‘Spacedock’ was proving to offer more experience in the entertainment industry than his formal education. His work on the channel quickly drew the attention of popular video game company Slitherine Software, which had been given the license to work on the Battlestar Galactica property. Recognizing Daniel’s knowledge of science fiction and writing acumen, they granted him free reign to contribute to the canon of the Battlestar Galactica world. He was later brought on by SyFy to do similar work for ‘The Expanse’, which turned into his popular series ‘Force Recon’. In his spare time Daniel enjoys reading and learning from the works of heritage science fiction authors and screenwriters, such as James S.A. Corey, Ronald D. Moore, and D.C. Fontana. He took several courses through The Open University to hone his craft in creative writing and screenwriting, practices his writing abilities with several screenplays and short stories, and frequently analyzes narrative theory in video essays on his channel.

Hair/Eye Colour: Brown Nationality: Centran Assembly, Centrum Job: Privateer Captain of the Guinevere, Defense Adjutant of the Avalon Expedition Favourite beverage: Tea As the only child of a renowned military family, Cassandra Farren was groomed for a naval career from birth, attending numerous War Colleges and Military Academies. Through studied dedication and hard work, Farren graduated with high acclaim and became an officer in the Centrum Defence Forces. After a traumatic event that ended her naval career, Cassandra was eventually convinced by her friend Tamara to begin applying her skills and qualifications again in a freelance role. The two women began to accept privateer work across the Tantalus Cluster. Assuming the role of a captain again was extremely difficult for Cassandra, but she ultimately accepted command over two crew members. In the months prior to the events of The Sojourn, Cassandra has pledged her ship and crew to the civilian Avalon Expedition, an ambitious project to travel into unknown space in search of desperately needed resources.

Hair/Eye Colour: Red hair, brown eyes Nationality: Centran Assembly, Firewatch Job: Director of the Avalon Expedition Favourite vice: Cigarettes Elizabeth grew up hearing about the Wanderer Expedition that first colonised her homeworld and became fascinated with science and exploration. She studied at the most prestigious centres of education on Firewatch, where she was noticed for her natural ability and was personally tutored by Doctor Sadavar Edric – eventual designer of the Edric’s Gate Program. Elizabeth’s family was killed in a collateral explosion caused during a Union/Assembly skirmish in orbit when she was a student, and Sadavar Edric adopted Elizabeth as his daughter. Ultimately, they worked together on the Edric’s Gate project until his retirement just before the launch of the Avalon Expedition. Elizabeth is confident, outgoing, passionately enthusiastic and somewhat reckless, behaving with an ever-apparent love for life and the universe. She brings this attitude to her leadership style, taking the responsibility of leading 60,000 personnel into unknown space without hesitation.

Hair/Eye Colour: Brown Nationality: Frontier Union, Maiala’s Rest Job: Medic, communications Favourite song: “Love Me Once Again” by Travis Lock. Tamara Melari learned medicine working in improvised clinics on her poverty stricken homeworld. When the Frontier Union (including Maiala’s Rest) rose in revolt against the Centrum Assembly, an enraged Tamara abandoned her people. Feeling that the Assembly was doing everything it could to help the worlds struck by famine, she joined the Centrum Marine Corps as a field medic, where she met and befriended Cassandra Farren. After years of fighting her own people, the Frontier Wars ended as work began on Edric’s Gate, and Tamara left the military to become a freelance doctor, helping those who suffered at the hands of her people.

Hair/Eye Colour: Brown Nationality: Merician Freehold, Meric’s Keep Job: Pilot, engineer, chef, morale booster Favourite activity: Cooking Born aboard Towershield Station over the planetoid Meric’s Keep, Mathias Croft has lived an adventurous and independent life working in dozens of different jobs, both safe and dangerous, both legal and not, across the Cluster. Eventually Mathias Croft met Cassandra Farren and Tamara Melari in a bar on Valeria Sibus, where they hired him to complete the crew of their new ship, the Guinevere. Mathias became very fond of the Guinevere and his new crewmates, and over the years he slowly decreased his service fee until ultimately accepting an equal cut and a permanent position aboard the ship, which he had come to see as his home.

Join us for the #AudioBook Tour with Character Profiles & Guest Post