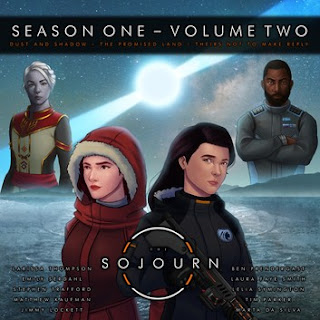 The Avalon Expedition forges on. Humanity’s final hope for salvation has survived the 3,000 light year journey across the intergalactic void, only to find themselves scattered and vulnerable in a forbidding and alien nebula. Privateer Captain Cassandra Farren, despite her misgivings, has accepted the burden of responsibility for the safety of the Avalon Expedition, but protecting the fleet and it's firebrand civilian director, Elizabeth Ancelet, will prove more complicated than she could have possibly expected. Continuing the award-winning series, Volume Two explores the painful past of the humans who made the journey, and the existential threat of those who already call the mysterious nebula home. Directed and produced with careful scientific consultation, The Sojourn captures every detail of life aboard ship, from the sounds of the smallest airlock seal to the largest space battle. Featuring a full cast of veteran voice actors, backed up by high-quality sound effects and an epic original soundtrack, The Sojourn is a unique and striking audio experience. Starring Larissa Thompson as Captain Cassandra Farren, Emily Serdahl as Director Elizabeth Ancelet, Laura Faye Smith as Tamara Melari, Ben Prendergast as Mathias Croft, Stephen Trafford as Inquisitor Castian Vadric, also featuring Matthew Kaufman as Lieutenant Jasper Ravi, Lelia Symington as Empress Valendra the Sixth, Tim Parker as Lord Cardinal Hastus Arvannis, and Amy Kay as Cindra Tacira. Written by Daniel Orrett and Rowan J. Coleman, sound design by Kennedy Phillips, music by Sam Redfern.

Daniel enrolled in Bangor University, North Wales in their film program, but quickly found that his work on his YouTube channel ‘Spacedock’ was proving to offer more experience in the entertainment industry than his formal education. His work on the channel quickly drew the attention of popular video game company Slitherine Software, which had been given the license to work on the Battlestar Galactica property. Recognizing Daniel’s knowledge of science fiction and writing acumen, they granted him free reign to contribute to the canon of the Battlestar Galactica world. He was later brought on by SyFy to do similar work for ‘The Expanse’, which turned into his popular series ‘Force Recon’. In his spare time Daniel enjoys reading and learning from the works of heritage science fiction authors and screenwriters, such as James S.A. Corey, Ronald D. Moore, and D.C. Fontana. He took several courses through The Open University to hone his craft in creative writing and screenwriting, practices his writing abilities with several screenplays and short stories, and frequently analyzes narrative theory in video essays on his channel.

We designed Spotify playlists for each of the main characters of the show - what we imagine they’d listen to if they lived in our universe.

I received this audiobook as part of my participation in a blog tour with Audiobookworm Promotions. The tour is being sponsored by The Sojourn Production Team. The gifting of this audiobook did not affect my opinion of it.