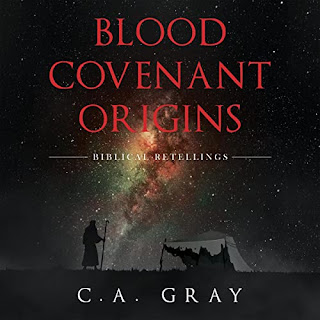 "Grief can change us... rewire our brains and shift the way we look at the world..." After returning home from her father's funeral to find her boyfriend in bed with another woman, Mackenzie Clair is looking for a fresh start. She thinks she'll find it in her favorite childhood vacation spot, but returning to Donn's Hill awakens more than nostalgia. Mac regains a lost psychic ability to talk to the dead, and the poltergeist haunting her apartment is desperate to make her use that gift to find his killer. Aided by her new roommate - a spirited Tortoiseshell cat named Striker, and the ghost-hunting crew of the nationally televised show Soul Searchers, Mac struggles to learn how to use her powers. But she'd better get a handle on them fast, because someone in town is hiding a deadly secret. If Mac can't somehow divine the truth, Donn's Hill will never be the same.

C.A. Gray is the author of three YA Amazon bestselling trilogies: PIERCING THE VEIL (magic and quantum physics meet Arthurian legends), THE LIBERTY BOX (dystopian metaphysics and mind control technology), and UNCANNY VALLEY (dystopian coming-of-age with neuroscience and super intelligent A.I). She starts with some scientific concept that she’s interested in learning more about herself, and then creates lots of epic chaos and high-stakes action to go along with it. Her stories are free of gratuitous violence, language, and sexual content, and she abhors depressing endings… but they’re not all kittens and rainbows either. She also listens to and reviews audiobooks on her website (here), Goodreads, Instagram, and on her podcast, Clean Audiobook Reviews, where she also occasionally interviews other authors. By day, C.A. Gray practices naturopathic medicine, podcasts, and writes medical non-fiction under her maiden name (Dr. Lauren Deville). She lives in Tucson, AZ with her husband Frank, and together they maintain an occasionally contentious film review blog (under her real name: Lauren Baden. Three names. Yes.) She’s kind of the queen of multitasking—so in her spare time, she creates whatever meals or crafts she found most recently on Pinterest, drinks lots of coffee (Aeropress btw) and occasional wine (reds—and she saves the corks for craft projects), works out (while listening to audiobooks), makes jewelry (and sells it on Etsy, here), and studies the Bible—about half of the podcasts on Christian Natural Health are scripture meditations. She does sleep, too. Promise.

TOP 10 THINGS YOU MIGHT NOT KNOW ABOUT C.A. GRAY